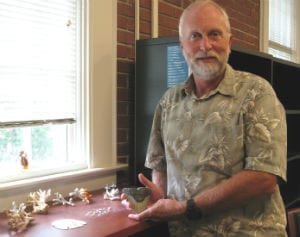 The Seneca Guns — mysterious booms that rattle the windows and nerves of coastal residents — have been quiet in recent months.

The fearsome rumbles occur with no warning and leave no clues to reveal their origins.

To be sure, the next Seneca Guns event will trigger frantic calls to local emergency management agencies. It probably will rekindle front porch debates about the source of the aberrations that have stymied scientists for centuries.

Absent convincing scientific conclusions, the strange soundings of the so-called Seneca Guns have become the stuff of legends and literature. In 1850, James Fennimore Cooper wove the phenomenon into his short story, The Lake Gun. The story goes that for centuries Seneca Lake in New York’s Finger Lakes region, emitted loud explosive sounds, which white settlers said, came from “the lake gun.”

Members of the Seneca Tribe, however, considered the powerful sounds to be the angry voice of their god, Manitou.

The prevailing version of the legend holds that irate ghosts of Seneca Indians fire their guns to disturb the descendants of the people who drove them from their land.

The Seneca Guns term has become synonymous with the unsettling salvos that occur well beyond Upstate New York. The guns are heard up and down the East Coast but seem particularly concentrated off the Carolinas, according to United States Geologic Survey, or USGS. Similar booms occur along coastal India, where they are called Barisol Guns.

They sometimes shake houses along the Dare and Currituck Outer Banks.

Marlene Dixon Varnam has experienced Seneca Gun episodes all of her life. Growing up in Varnamtown, a Brunswick County fishing village on the shores of Lockwoods Folly Inlet, the occasional rumbling folds into other unexplained mysteries the ocean holds, she says.

Varnam owns and operates Carson Varnam Seafood Market, a business she and her late husband launched back in 1955. 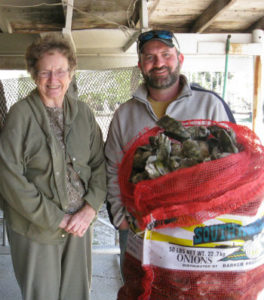 Marlene Varnam grew up in Varnamtown and has heard the mysterious booms all her life. On her left is grandson Mickey Fulford in the family fish market.

“As a child I was curious about what they were. My first thought, of course, was that there might be a storm. But, then, there would be no clouds in the sky. Our house might shake, but I was never frightened,” she recalls.

“Through the years, we heard a lot different things that might be causing the booms – earthquakes, part of the continental shelf slipping away and jets breaking the sound barrier.

“There are no definitive answers, and the booms have become part of our lives. We just go about our business when it happens. Some mysteries you just can’t solve.”

She may be right, says Jack C. Hall, professor of geology and chair of the Department of Environmental Studies at the University of North Carolina-Wilmington.

Nevertheless, it is compelling – and fun – to explore the science behind the ephemeral sounds. It may be less challenging to point to what the Seneca Guns are not, says Hall.

“The Mid-Atlantic Ridge is not going anywhere. Its movement is so slow, it is not measureable on seismic charts,” Hall explains.

Some scholars estimate that the Mid-Atlantic Ridge – the underwater mountain range that splits the entire Atlantic Ocean nearly in half from north to south – is spreading at an estimated 0.08 feet per year, or 15 miles in a million years.

Hall points out that seismic records don’t support the theory that Seneca Guns events are indicative of continental shelf landslides. There have been none recorded.

“We definitely know when it’s the real deal, such as the earthquake that occurred in August, 2011, in Virginia. Tremors were felt from Connecticut to North Carolina. That’s because the quake struck in the North American craton – the backbone of the continent. The shock waves reverberated through the solid mass in many directions.” Hall explains. “Most people heard it and felt it.” 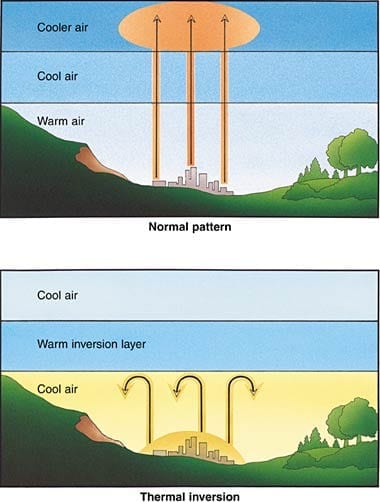 A thermal inversion could amplify distant sounds to create the booms.

To Hall, with no measurable movement in the earth’s crust to attribute to Seneca Guns, it makes more sense to look to the atmosphere for answers.

“The right atmospheric conditions, such as an inversion layer, can put a lid on the atmosphere, so to speak. It would create a situation where sound waves bounce from the ocean surface to the air layer and continue to bounce back and forth until the wave of sound reaches the shore,” Hall points out.

A thermal inversion could amplify distant sounds to create the booms.
Temperature inversions occur in coastal areas when upwelling of cold water decreases surface air temperature and the cold air mass stays under warmer ones. What’s more, North Carolina’s coast juts out into the Atlantic, essentially creating a microphone effect.

“Sound waves travel long distances and can generate a wall of sound like a bass player at a Black Sabbath concert,” Hall quips.

With that in mind, it seems feasible that Seneca Guns boom loudest when an inversion layer amplifies a natural event, such storms far past the horizon; or a man-made situation, such as breaking the sound barrier.

“It all comes down to stratification,” Hall surmises.

“I’m also inclined to attribute the occasional booms to military games offshore as the source of an occasional eruption of Seneca Guns. Of course, the military folks are not predisposed to commenting on secret maneuvers,” Hall points out.

Some have suggested that much of the guessing about the source of Seneca Guns bursts could be eliminated by installing an array of sensitive seismic instruments along the coastline to record and analyze each event.

However, since there is no evidence that Seneca Guns do little more than rattle windows and nerves, it’s unlikely to find institutions or individuals willing to pick up the $20,000 tab for the equipment that may – or may not – solve the mystery, Hall says.

Go to comments
This story is provided courtesy of Coastal Review Online, the coastal news and features service of the N.C. Coastal Federation. The Outer Banks Voice is partnering with Coastal Review Online to provide readers with more environmental and lifestyle stories of interest in our area. You can read other stories about the N.C. coast at www.nccoast.org.