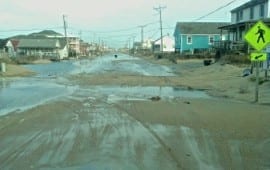 At the town’s last Planning Board meeting, citizens were informed that Kitty Hawk is taking the threat to its beleaguered shoreline seriously.

Ironically, that is the exact situation prevailing in Kitty Hawk today, with one glaring exception.

The hardened structure serving as the last line of defense between the town’s infrastructure and the Atlantic Ocean isn’t a groin, a jetty, a seawall or an offshore artificial reef.

The hardened structure that defines the town’s boundaries between the land and sea is a road, specifically N.C. 12.

Over a decade ago the dire status of the town’s shoreline was revealed when the Army Corps of Engineers conducted a study on the efficacy of beach nourishment along Dare’s northern beaches.

It was that study and an initial funding promise from Congress that prompted the so-called “sand tax” to be considered to generate the local portion of revenue needed to fund the mostly-federal project.

Even then, it was uncertain if much of Kitty Hawk’s oceanfront would be covered by a federal project. The Army Corps bases some of its qualifications for nourishment programs on the value of the infrastructure the wider beach would protect.

In much of Kitty Hawk, the oceanfront infrastructure of revenue-generating rental homes had already been lost to the ocean.

The damage was so severe because wave action, rather than flood surge, struck the road and buildings, both commercial and residential on the west side of N.C. 12.

Irene threatened the road in 2011 and Hurricane Sandy caused the road to buckle and close last year.

This year’s nor’easters overwashed the road and caused temporary closings.

The road closures are not the only concern, although N.C. 12 is the only north-south alternative for traffic besides U.S. 158.

The sand beach in Kitty Hawk has become so narrow and hard to access, tourists have moved south to Kill Devil Hills and Nags Head.

Constant flooding has not only eliminated most of the town’s oceanfront — and the revenue oceanfront properties generate — it now threatens homes and businesses on the west side that no one could argue were built “too close to the beach.”

Popular spots such as The Black Pelican and Ocean Boulevard have been slammed by these storms.

If one drives along the Beach Road in Kitty Hawk and in the areas between N.C. 12 and U.S. 158, one will notice a deterioration of the physical infrastructure.

Homes “between the highways” in Kitty Hawk rent for considerably less than in towns to the south.

Driving through the town’s rental district, certain trends are noticeable. Homeowners are not maintaining, upgrading or otherwise improving their rental properties in Kitty Hawk to the extent seen in other towns.

We’re not talking about or advocating the lack of 15-room “McMansion” homes in Kitty Hawk. Instead, the rather melancholy look of Kitty Hawk’s rental market indicates property owners are reacting to the condition of the town’s beaches.

Uncertainty about the future is likely affecting investment decisions as far west as U.S. 158, which is also increasingly subject to flooding as the beach continues to disappear and wave energy is not absorbed until it reaches the Beach Road.

Whether the answer lies in beach nourishment, the relocation of the Beach Road, a change in the state’s position on offshore storm abatement structures — or some combination of all three — we leave to others to decide.

But a basic rule of economics is that uncertainty causes more economic damage than onerous regulations and even taxes. Investors may not like rules and taxes, but they and the market can adapt.

But no business can adapt to uncertainty or silence — and Kitty Hawk has been silent about the situation along their oceanfront for too long.

We are encouraged by the recent discussions on the Planning Board.

Our hope is those discussions continue and advance to the Town Council and public meetings and hearings.

Silence isn’t always golden. Sometimes it has the opposite effect.