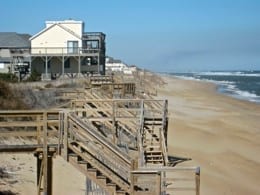 A 2-cent tax increase will be part of upcoming budget discussions in Duck as officials look at starting work on widening about a mile and a half of the town’s shoreline.

Two cents per $100 of valuation would raise about $300,000 toward engineering work, deciding on sources of sand and settling on the most economical plan to bulk up the beach.

The stretch of beach roughly along Buffell Head Road has long been considered a hot spot for erosion. But last year, Hurricane Sandy took out 14 to 40 feet of the dune line, Layton said.

“Sandy really pushed is in this direction,” he said. 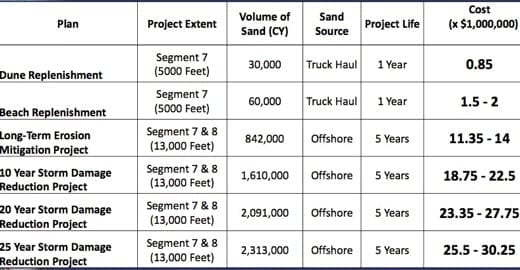 Duck’s plans come at the same time Kitty Hawk is beginning to consider options for flood control along its oceanfront and the county moves forward with a project in Rodanthe and Buxton. With $17 million reported to be in the county’s Shoreline Management Fund, there is not enough money to go around.

Recent storms and the early success of Nags Head’s 10-mile, $36 million widening project have been an impetus for others to push ahead.

County policy calls for towns to pay for preliminary work on their own.

Duck will have to create enough public access to qualify for county funds. While the beach is public, all access now is through private property.

Last month, the Town Council discussed the possibility of buying an oceanfront property that was undermined by Hurricane Sandy. It is in the vulnerable hot spot that would be nourished along Buffell Head Road on the north end of town.

The property is on the market for $900,000 and would be large enough for at least 20 parking spaces, the minimum the county requires every mile for a town to qualify for partial funding. A Coastal Area Management Act grant from the state was discussed as a possibility to help pay for it.

Duck could also look at creating an access with parking on public streets. Streets on the very northern end of two segments of the beach under consideration are private, however.

Of the six concepts, Coastal Planning is suggesting that at minimum the town would need a “long term erosion mitigation project.” That plan would put 842,000 cubic yards of offshore sand unto 13,000 feet of shoreline at a cost of $11.35 million to $14 million and last five years, according the Coastal Planning.

Mayor Don Kingston challenged some of the consultant’s conclusions, asking why options jumped from a 60,000-cubic-yard truck haul to a 842,000-cubic-yard offshore dredging project. He wants to know if there are more sensible options in between.

Layton said that as the number of truckloads increase, the benefits diminish. Hauling 60,000 cubic yards of sand adds up to about 3,000 truckloads, which introduces other issues such as traffic, noise and time.

“It very simply comes down to volume,” Layton said.

See more on the options »