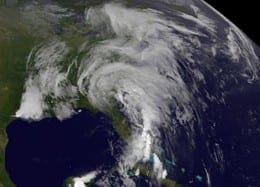 Andrea was downgraded to a post-tropical storm at 5 p.m. today but was still throwing off squalls and top winds estimated at 45 mph, the National Hurricane Center said.

At 3:35 p.m., the National Weather Service reported that 1.38 inches of rain had fallen at First Flight airstrip in Kill Devil hills. Forecasters said 2 to 4 inches of rain were likely, with more possible in some areas.

Winds were forecast to gust up to 50 mph along the coast and 35 mph inland, according to the National Weather Service in Morehead City.

A wind gust of 51 mph was recorded at the Oregon Inlet Coast Guard Station. Sustained wind there at 5:06 p.m. was 40 mph, just above the threshold for a tropical storm. But generally wind speeds were much less elsewhere.

A possible funnel cloud was spotted by air traffic controllers earlier today in Goldsboro. South of the Outer Banks, in the Wilmington area, flooding and downed trees were reported.

“The threat from sustained tropical storm force winds of 39 mph will likely remain east of Highway 17,” forecasters said in their local update Thursday. “A few small tree limbs could be knocked down with very minor impacts to weak structures and perhaps an isolated power outage.”

Surf today will reach 6 to 9 feet with a risk of rip currents, especially on southern-facing beaches. Minor erosion is expected, and the weather service said swimmers should stay out of the water.

Water levels 1 to 3 feet above normal could cause minor coastal flooding. A flood watch is in effect until 8 p.m. today.

The weather service said isolated tornadoes or waterspouts would be more likely if the center was inland.

Andrea moved into northern Florida Thursday afternoon as a tropical storm. At 5p.m. today, it was moving northeast at 28 mph about 100 miles west-southwest of Norfolk.