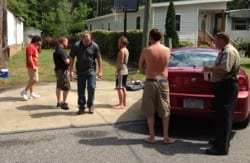 Dare County deputies were on the scene of a double shooting off Colington Road Saturday afternoon.

Dare County Sheriff’s Office Chief Deputy Steve Hoggard said that the incident is being investigated as a murder-suicide.

One victim had died by the time authorities arrived at 2:24 p.m. in the 400 block of Sandpiper Drive. The Dare County EMS helicopter was sent to the old landing area in Colington, but the second victim could not be revived.

The scene has been secured, and authorities say there is no danger to the public.