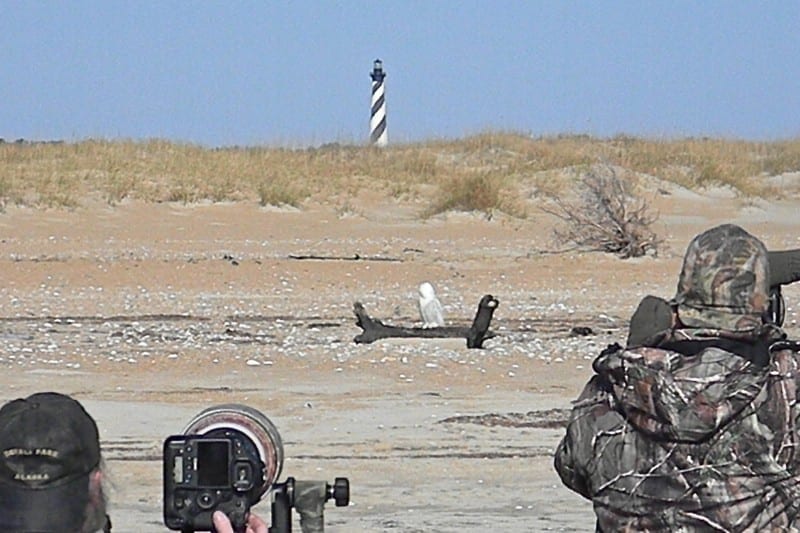 A snowy owl with a rare backdrop. (Jay Ross)

Hatteras Island has become one of the locations being included in what is being called an “eruption” of snowy owls.

The species is usually found above the Artic Circle and sometimes ventures lower into the far north states. But this year reports of sightings are coming  from a number of states along the Eastern Seaboard, with North Carolina being the  most southern. Most of the reported sightings are of immature birds.

Thanksgiving week, a buzz began among wildlife photographers and birders that a snowy was making itself comfortable at Cape Point. The news immediately began to draw visitors from across the state and beyond.  And there have been reported sightings in Wake and Hyde counties.

Sightings are not unusual in the northern United States or even as far south as Kansas in the central region, but the number of birds seen and the expanded locations this year has ornithologists scratching their heads as they try to determine what caused it. There even have been sightings in Bermuda, which sits 600 miles off the coast and has a subtropical climate.

Professional photographers who sell their work to such publications as National Geographic have been lining up with tripods as they try to get “the money shot” — a great picture of the bird with the Cape Hatteras Lighthouse in the background.

The closure of the Herbert C. Bonner Bridge has done little to dampen the enthusiasm. Online birding and photography chat rooms are full of postings with information about the ferries and recommendations about where to stay on Hatteras Island.

Drastic weather changes don’t seem to be bothering the owl that was reported being seen on Saturday, Dec. 7.