Kentucky hot browns, just in time for The Derby 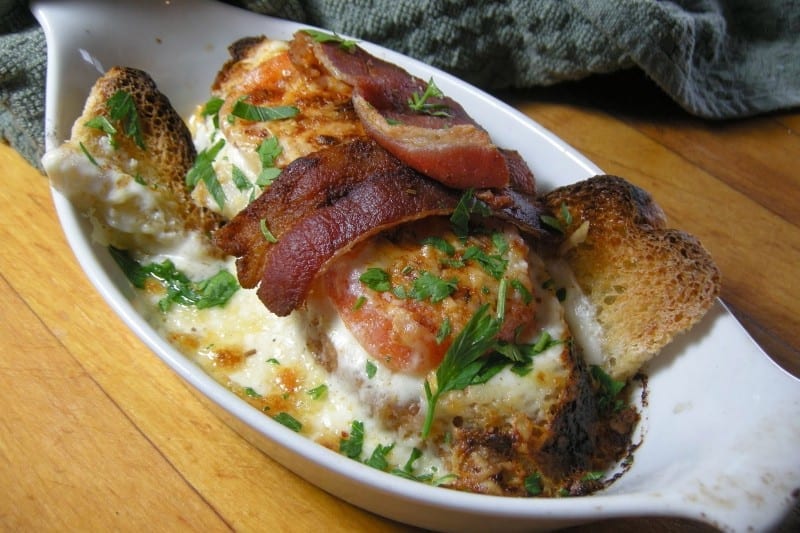 The Kentucky Hot Brown, an open-faced sandwich that layers sliced turkey, tomatoes, Mornay sauce, and bacon atop thick-cut toast, was created in 1926 at the Brown Hotel in Louisville, Ky., by Chef Fred K. Schmidt.

During the 20s, the Brown Hotel regularly drew over 1,200 guests each evening for a glamorous party of dining and dancing. When the band took a break at midnight, the late-night revelers would flock to the restaurant for sustenance to keep them going for the rest of the night.

Melt butter over medium-low heat, then slowly whisk in flour until well-combined. You’ll have a thick paste and this is officially known as a roux. Continue to cook the roux for about 2 minutes, whisking constantly, to cook the raw taste out of the flour. Slowly whisk in the heavy cream until the sauce thickens and begins to simmer. Add the freshly ground nutmeg and season with salt and pepper to taste. This is now a Béchamel Sauce, one of the classic French mother sauces. Remove from heat. 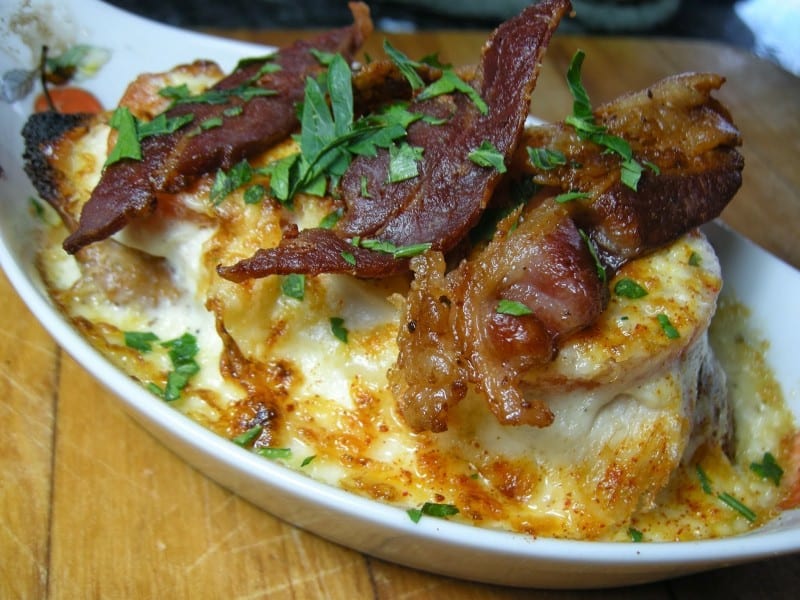 Add in the Parmesan and Gruyère cheese and stir until cheese has melted and the sauce is smooth. You now have a Mornay sauce. Season, if needed, with Kosher salt and freshly ground pepper.

For each sandwich, place the toasts in an oven-safe dish and cover with the turkey slices. Place two toast points alongside. Top with the tomato slices and pour enough Mornay Sauce to completely cover. Sprinkle with additional cheese. Place under broiler until cheese is bubbly and lightly browned. Remove from oven and top with crisp bacon. Sprinkle with parsley and paprika over top.

Rosie Hints:
Once you know how to make a basic Bèchamel sauce and Mornay sauce, there are plenty of uses for them:

Any “Cream of …” Soup starts out with a Bèchamel Sauce. Simply thin it out with some stock and/or milk and mix in:
#1 Blanched broccoli. Top with crumbled bacon, grated cheddar cheese, and parsley.
#2 Sautéed mushrooms, with a splash of sherry.
#3 Diced chicken, with extra broth, chopped tomatoes, cumin, and cilantro.
Bèchamel sauce is also the glue that binds a classic lasagna.
Try adding some cooked sausage and onions to your Bèchamel and pour over your breakfast biscuits.

As for the Mornay Sauce, why not make Eggs Mornay? Toast your muffins. Sauté a slice of ham. Wilt spinach in butter. Poach your eggs. Top muffins with ham slice, then a nest of spinach for the poached egg. Top with Mornay sauce spiked with smoked paprika. Sprinkle with sliced scallions and chopped parsley.

Think about broiled Oysters Mornay on the half-shell. Add a splash of sherry to the Mornay sauce for an extra zing of flavor. Top oysters with a spoonful of sauce, a little extra grated Pecorino Romano, and some Panko breadcrumbs. Give it a quick trip under the broiler until golden brown. For my oven, it’s 300° 3-4 minutes.

A Mornay topping would be a delicious treatment for numerous steamed vegetables — asparagus, broccoli, cauliflower. I encourage you to experiment. That’s the only way to learn.

I would be remiss if I didn’t give you a Mint Julep Recipe.

Make a simple syrup by boiling water and sugar together for five minutes, stirring occasionally. Muddle with 8 or 10 sprigs of mint to release the oil and aroma of the mint. Cover and refrigerate overnight. Fill cups with crushed ice and stir until the cup is frosted on the outside. Add 2 tablespoons of mint syrup and a big shot of Kentucky Bourbon. Stir and garnish with a sprig of fresh mint, and Run for the Roses.

Happy Derby Day and please visit with Rosie at Kitchens Are Monkey Business.