Impassable a few weeks ago, the Oregon Inlet channel at the navigation span of the Bonner Bridge is now 8 to 11 feet deep, according to a new U.S. Army Corps of Engineers survey.

Surveys had shown depths of 2 feet in some spots as heavy northeast winds during the winter undid a major dredging project in December. It was so shallow, dredges could not reach the shoals to clear them out.

Two weeks ago, the sidecast dredge Merritt was able to get into the area to cut a path for the larger hopper dredge Currituck to go to work.

The Currituck pulls sand into its hold and is taking it to an area of erosion around piling south of the navigation span.

Shifting winds have also helped move sand from the channel. 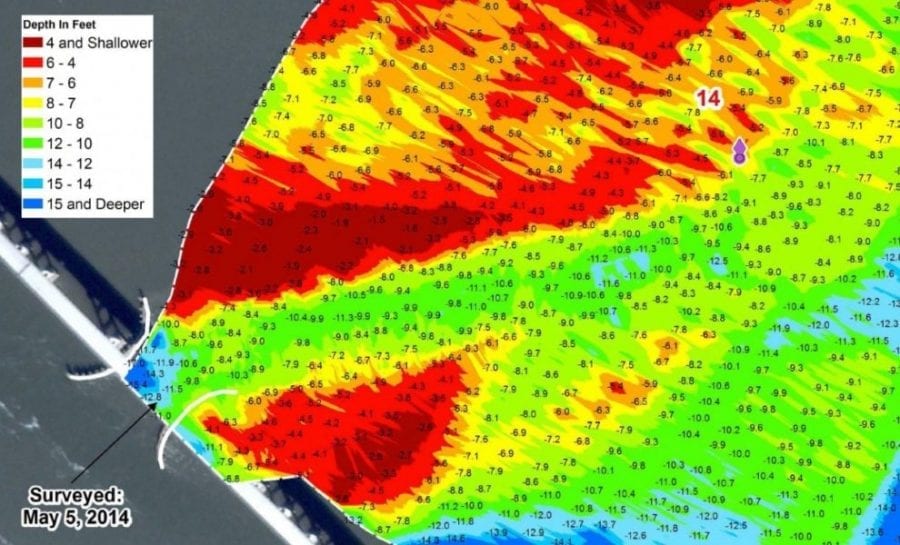 The survey taken Tuesday, May 5 shows a clear cut from the navigation span to the deepest area of the inlet. Negotiating the passage, however, still requires a sharp turn around the encroaching Bodie Island spit.

A pipeline dredge made a cut 600 feet wide and more than 14 feet deep at the bridge and tapering to 400 feet at the ocean bar in December. The job used $7.8 million in Hurricane Sandy relief money.

The Corps’ Wilmington District says keeping the federal channel dredged to the depth needed for commercial vessels would cost $4 million to $5 million a year. The Corps was allocated $1.3 million in fiscal year 2014 for Shallowbag Bay, which includes Oregon Inlet and other channels in the area.

President’s Obama’s latest budget proposal calls for $800,000 in 2015. That is about enough for surveying, the Corps said.