Booms are one thing, but what were those bright orbs?

…loud boom off shore from NH to Duck about 30 mins ago. Unknown orgin. USCG has been notified. .. no reports of damage.#obx

Reports are that a loud boom or series of booms last night came from Navy training exercises, but numerous people on the Outer Banks also reported seeing bright orbs rising above the ocean at about the same time.

Speculation about the lights has ranged from Chinese lanterns released from the beach to helicopters and hovering Osprey aircraft operating offshore.

Nothing has been confirmed yet, but we feel confident in reporting that they were not UFOs.

Ed Beckley, who lives in Nags Head and has a good vantage point from his house on a dune line near Jockey’s Ridge, said he saw the lights from his top floor after hearing the boom.

“Very quickly there were six of seven of them,” Beckley wrote in an e-mail. “Four of them formed a square formation. Another one was north and higher than them, and another one was just south and lower.

“They all looked the same, and they were double orbs, almost like a figure 8, or the letter 8. Or even more similar to a pair of eyeglasses when you look at them vertically. And it seemed as if the orbs were connected by a beam of the same orange light.” 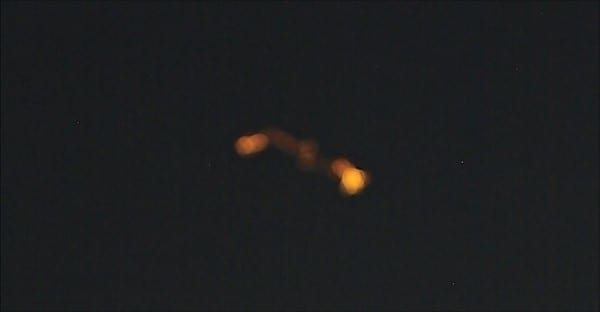 Beckley took pictures with a telephoto lens but had trouble with clarity because long lenses are sensitive to movement.

He later said that he was told at the Nags Head Fishing Pier that the lights were Chinese lanterns, which are lit and released to rise into the sky. Popular with weddings and similar celebrations, they are illegal in Nags Head and other areas.

Roberta Thuman, Nags Head’s public information officer, checked with Police Chief Kevin Brinkley, who said he had not heard any reports of Chinese lanterns being released. But he did say that Beckley’s description was consistent with lights seen over the Dare Bombing Range on the mainland.

These lights, however, were to the east.

The Navy conducts regular training exercises off the barrier islands and startling rumbles are not uncommon. In this case, however, the reverberation was louder and more concussive.

WAVY-TV in Norfolk quoted a Navy spokesperson as saying that the source of the noise was a Navy exercise.

We have a call into the Navy to try find out more. Check back later for any updates.