Bacon adds some sizzle to these recipes by Rosie 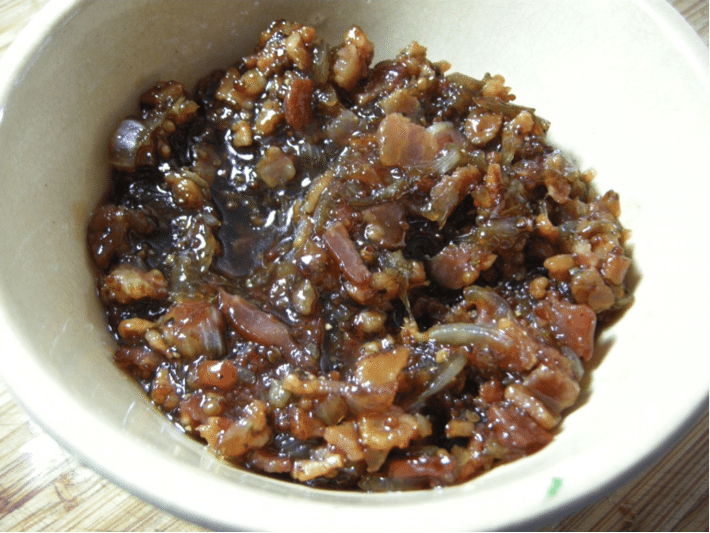 When it comes to bacon, I’m a passionate woman. I’m convinced bacon makes everything better.

Cut the bacon into small dices and fry over low heat until crisp. Take your time so the bacon cooks slowly and evenly, about 20 minutes, pushing the bits around every now and then. Remove bacon and drain on paper towels. Reserve 1 TB bacon grease in the pan. Add in onions and cook over medium low, stirring constantly, until they’re tender and translucent, about 3-4 minutes. Add in brown sugar and cook, stirring, about a minute. Turn heat to medium and add in vinegar and mustard and cook until vinegar evaporates. Stir in maple syrup and pepper. Return bacon bits to pan and stir to coat. Makes about 1 cup of bacon marmalade. Store in refrigerator. 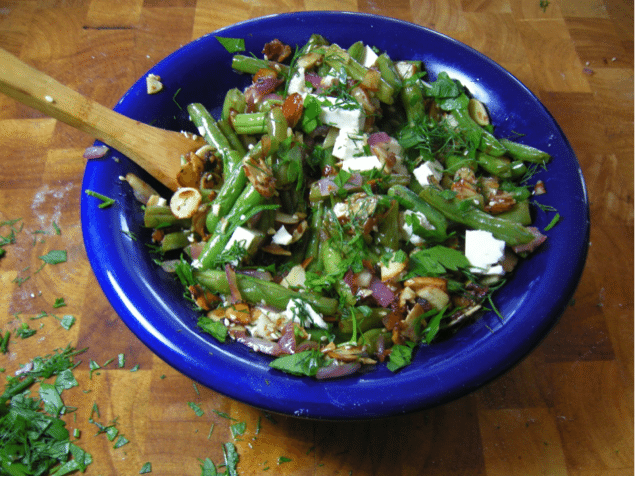 Blanch the beans in salted, boiling water for about 2 minutes
Drain beans and plunge into ice water to stop the cooking and set the color.
Pat dry.
Heat olive oil and butter in skillet over high heat. Add in beans, almonds, red onion, Bacon Marmalade, sugar, and salt to taste. Tossing and stirring, cook until beans are al dente about 2-3 minutes. Cool a bit, and then add in diced feta, dill, parsley, and sesame seeds.

For a quick and easy appetizer, we like Bacon Marmalade Cheese Squares. These can be made ahead of time, frozen, then pulled out whenever wanted, and baked until brown and bubbly. 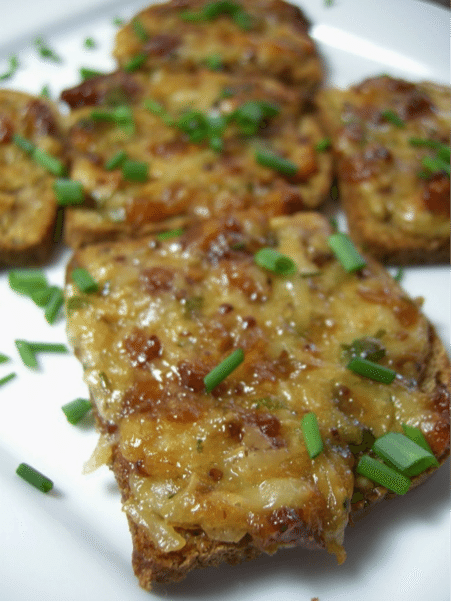 Combine bacon marmalade, cheeses, mayo, and scallions. Thinly spread on cocktail rye squares. Place on baking sheet and place in freezer for 30 minutes.
Bake at 350° for 15-20 minutes until browned and bubbly. Serve with chopped chives sprinkled over top. This recipe made 8 squares; however, I did not pack my cheese in the measuring cup. The grated cheeses were loose. If you tightly pack your cheese, adjust with a little more mayonnaise.

As always, please visit with Rosie at Kitchens Are Monkey Business for more recipes, my gardens and flowers, travelogues, and the assorted fur-babies with whom we share our lives.