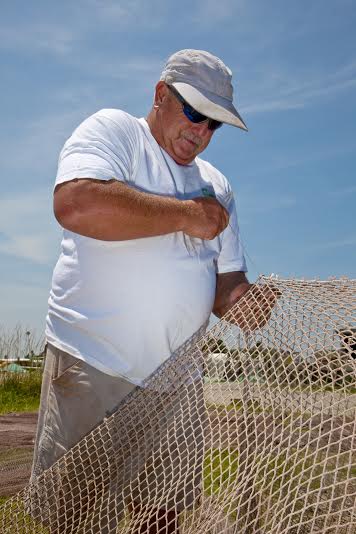 Peele lives in Hatteras village on land owned by his family since the early 19th century. He has lived on the island for all of his 62 years except for the years he served with the U.S. Army Rangers.

“I liked being a Ranger,” he says, “but when my four years were up and they talked to me about re-enlisting, I told them they could do all the talking they wanted, but I was going home to Hatteras.”

Peele traces back five generations of fishermen in his family. He got his start in commercial fishing when he was 17, working on the beach haul-seining for rockfish with an uncle. Another uncle built the 20-foot skiff Peele uses for fishing in Pamlico Sound.

His uncles also built the fish house that Peele owns today. The waterfront building is where commercial fishermen unload their catches for packing and transport. Despite the market demand for waterfront property, he is determined that the land support commercial fishing in the future.

“I have a lot of fishing history in my blood, and my roots go stronger than selling out and putting a condo there,” he says.

“Claudia culls the crabs as I dump them, the males, the females and the conchs,” he says. “She baits the pots and helps me set them. When we gill net, she pulls one line. I pull the other and I pick the fish. She’s doing good.”

In addition to good seafood, Peele can serve up a good story, including stories handed down about the village’s fishing heritage in the days before bridges and paved roads, when boats carried Hatteras fish to Elizabeth City and Washington, N.C.

“They’d bring big cakes of ice, 300 pound cakes of ice, packed in sawdust, and would shave it and ice the fish in wooden boxes,” he says. “It was all by freight boat.”

He also shares storm stories. Hurricane Emily in 1993 flooded his house with nearly a foot of water from Pamlico Sound. In 2003 Hurricane Isabel didn’t push sea water into his yard, but the water did breach the dunes and highway in Hatteras, cutting the village off from the rest of the island for several months.

Locally, the breach was nicknamed Michael Peele Inlet because the fisherman was the first person to drive a boat through it.

“An old house had washed out into the water,” he recalls. “I drove my boat underneath the house and looked up and saw cups and saucers and dishes still in the cupboard undisturbed.”

Peele lives off the sea and land, much like his ancestors did. He and Claudia tend a vegetable plot and eat plenty of fish, crabs and oysters.

“I like jumping mullet when it’s a little bit fat,” he says. “Mullet and bluefish are my favorite fish, but I like it all,” he says.