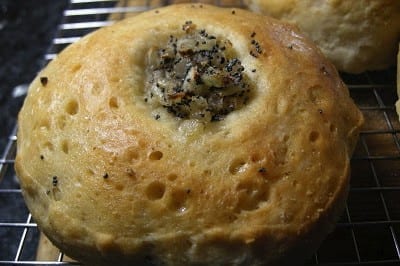 Have you ever heard of a bialy? Chances are you haven’t unless you live in New York City, LA, and certain places in Florida and Chicago.

Bialys are found wherever there is a significant Jewish population. A small round yeast bread, a bialy is a cousin of its more famous relative, the bagel. A bialy doesn’t have a hole; it has an indentation into which you add poppy seeds and chopped onion.

I love food with a history and the history of the bialy is indeed both rich and poignant. The bialy is Polish, by origin, from Bialystok, in the northeast part of the country.

In the early part of the 20th century, about 1½ million Polish Jews immigrated to New York City, bringing with them their culture, their recollections, and their cherished recipes. In 1941, the Nazis ordered the establishment of a Jewish ghetto in Bialystok and most of the Bialystok Jews were exterminated.

Mimi Sheraton, former New York Times Times food critic, discovered the bialy at Kossar’s, a landmark eatery in New York City and the oldest bialy bakery in the United States. In her book, The Bialy Eaters, Sheraton tells of her pilgrimage to Bialystok in search of bialy history and the people who invented this wonderful bread. Her desire was to learn what a bialy would look and taste like in its place of origin.

When Sheraton journeyed to Bialystok in 1992, what she found was a place of desolation — both culinary and otherwise. She encountered the Bialystoker kuchen fressers’ vanished way of life. Turn of the century massacres, years of prejudice and pograms, followed by the Holocaust, had reduced the Jewish population from 50,000 to 5.

Sadly, no bialys were to be found in Bialystok. A vibrant culture and its iconic bread were long gone.

Sheraton’s passion led her on a worldwide mission to revive the exiled memories and rescue the stories of those scattered Bialystokers and their once dynamic culture and cuisine. As Sheraton sought out Bialystokers in all corners of the world, they were eager to share memories of the kuchen that was the literal and figurative staff of their lives. 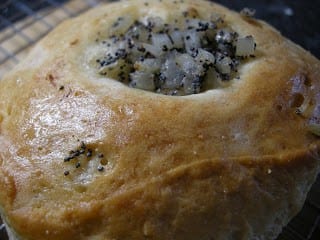 Sheraton opens her book with an eloquent quote from Samuel Pisar, a Holocaust survivor, who was marveling at a group of ethnically diverse people munching on bialys from a food wagon in New York City:

“When I was an adolescent in Auschwitz lying on the hard shelf that was my bed and hallucinating from hunger, I would often try to recall the shape and savory aroma of the kuchen we used to eat at home in Bialystok. By then I had lost all of my family and school friends.

“Years later, when I was in New York, I would often watch those street-corner wagons that sell coffee and bread in the morning. I marveled at the whites, blacks, Asians, and Latinos as they munched on their bialys. I felt as though I was from another planet. To each of them, it was simply a tasty snack.

“How could they know they were partaking of something sacred – a bread that evoked bittersweet memories of a cultured and tragic corner of eastern Poland? A bread that, in my psyche, summons up even today the mystical dream world of Marc Chagal and Isaac Bashevis Singer.”

Food is the collective icon that recalls home and family and evokes an unrequited yearning for a lost world. Few things in life can elicit such nostalgia as the foods of one’s childhood — a reminder of the safety and security of family and home. Among foods, I think no food has a greater resonance than bread — the staff of life. Bread is the true and original soul food.

Bialy is the story of a Polish town’s lost world and the daily bread that sustained it. The story of the bialy is a tribute to endurance itself.

“My desire to learn what a bialy might look and taste like in its place of origin was one of many such quests I have made during the past forty years. What some might consider gastronomic obsessions are partly a sort of hobby, prompted by simple curiosity.

“But, inevitably, there are professional concerns, for as a food critic, I look for the best and most authentic products and preparations to serve as benchmarks . . . As an adjunct pursuit, I also look for varying interpretations of ethnic classics as they emigrate from native grounds.

By studying the history of a food, I gain a new perspective and respect for both the food and the people who produced that food. It is humbling and I want to do right by the food, the culture, and the people.

As usual, I researched numerous recipes for bialys, picking and choosing from the recipes, and came up with my interpretation of the bialy. 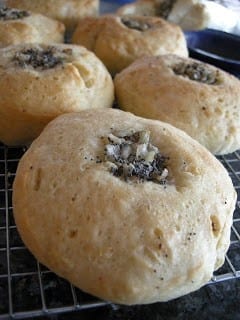 In a large bowl, mix 1/2 cup warm water, yeast, and sugar. Stir to dissolve. Let mixture stand about 10 minutes until “proofed,” i.e. foamy and bubbly. The yeast must “prove” that it’s alive.

Add remaining 1 1/2 cups warm water, bread flour, all-purpose flour, and salt. I usually knead by hand, but today I decided to go with my Kitchen Aid and the dough hook. I kneaded this for about 10 minutes. Keep kneading until smooth. If you knead by hand, I’d double the time.

Turn dough out onto lightly-floured board and roll into a cylinder shape about 12 inches long. I start by rolling the dough, then I pick it up like a rope and make some jump rope action on it to make the cylinder lengthen and relax. Then you might let it rest for a few minutes. Pick it up at one end and dangle it. Pick up at the other end and dangle. Roll. Jump rope. Rest. Repeat.

This takes a while. Be patient. Work with it until you get a 12-inch log. Cut roll into 8 rounds (2 ½-3 inch diameter and 1 ½ inches high), cover with plastic, and let rest about 10 minutes.

Pat each round into a circle and place on cornmeal-dusted parchment sheets. Cover with plastic wrap and let rise another 30 minutes, or until increased about half in bulk.

While the bread is rising, make the onion topping.

Make a depression in the center of each bialy, pressing from the center outward, leaving about a 1-inch rim. Fill each indentation with the Onion Topping and let rise 15 minutes. 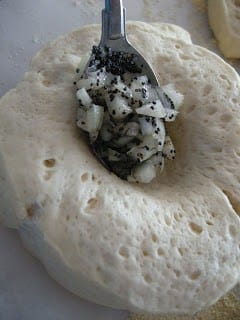 Heat oven to 450°. I placed a baking stone on the top rack and an iron skillet on the bottom.
After the oven reaches 450°, wait 30 minutes before putting the bialys in. You want the baking stone and the skillet sufficiently hot all the way through.

I used a pizza paddle to slide the parchment sheets with the bialys onto the baking stone. Throw a pint of ice cubes into the iron skillet and immediately close the oven door. The steam from the ice on the skillet helps form a crust. Cook about 10-12 minutes, until a light golden brown.
Cool on racks.

Serving tip: Mix poppy seeds with your favorite extra virgin olive oil in a small bowl. Add fresh herbs if desired. Dip the bialy in the oil and enjoy. By no means forget a schmear of cream cheese.