Ocean algal bloom generates interest, but not concern — yet 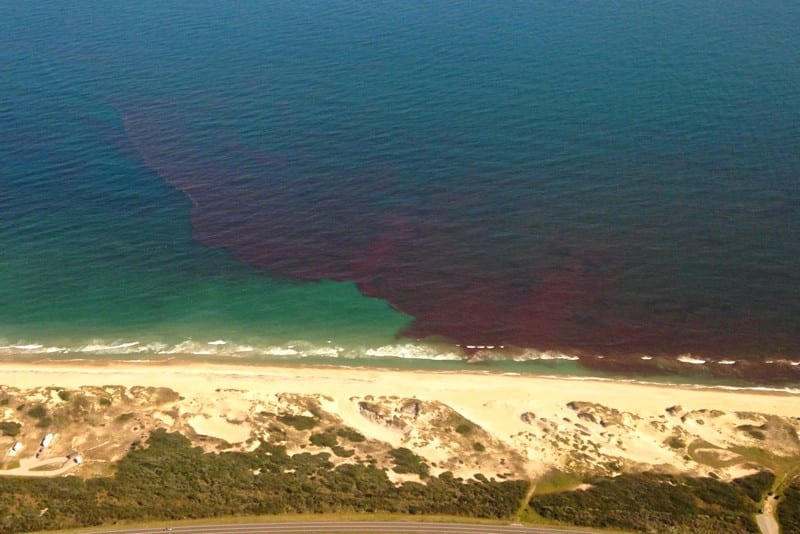 A reddish-brown tide that appeared Monday along Bodie and Pea islands has piqued the interest of ocean scientists and National Park Service personnel.

Dr. Richard Stumpf, NOAA scientist at the National Centers for Coastal Ocean Science, said Tuesday that based on the color of Monday’s tide, a number of algal blooms could be the culprits, some of which are harmless.

“That isn’t to say it isn’t harmful,” he said, adding that the only way to be certain was through a water sample.

Stumpf contacted First Flight High School’s Phyto-Finders, a group that has the necessary equipment to take the sample and send it to NOAA scientists.

He said the group was hoping to collect samples Tuesday.

The area of the discolored tide stretches from immediately south of Oregon Inlet all the way to Buxton, said local resident Woody Harris. Harris took an aerial shot of the tide Monday.

“The area where it seemed most dense was between Oregon Inlet and Rodanthe,” he said.

What is often referred to as a toxic red tide has been in the public spotlight this fall due to its annual appearance off northwest Florida. There is no evidence that points to this being a similar phenomenon. That particular Florida tide, caused by the organism Karenia bevis, is harmful to humans and marine life. The last time such a red tide has been seen in North Carolina, said Stumpf, was Halloween of 1987.

Stumpf worked on-site during that bloom near Beaufort in the 1980s and said an irregular pattern in the Gulf Stream was detected during that period. He said he planned to research whether similar patterns have been present recently.

“There are many organisms that can cause a red tide. Some are toxic, like the one in the Gulf of Mexico, and some are just red,” Stumpf said.

Dr. Quay Dortch, coordinator for NOAA’s Ecology and Oceanography of Harmful Algal Blooms program, said it is impossible to tell by a photograph what the tide might mean.

“There are things that cause discoloration of water that is not necessarily bad. There are blooms that have no impact and some that have terrible impacts,” she said.

“It’s in a spot where there are no outfall pipes. The closest outfall is at what we call Ramp 1.” Ramp one is located near Whalebone Junction.

“It’s probably harmless, just very colorful,” Dortch said of the photograph. “But I also can tell you that I won’t be surprised if it is harmful.”

According to NOAA literature, less than one percent of algal blooms actually produce toxins. While Stumpf said that it could be caused by the harmless bioluminescent dinoflgellates called Noctiluca, which can make the sea phosphorescent, he said the color of the Pea Island tide was not indicative of it, at least from the photograph.

Red tides, also referred to as harmful algal blooms (HABs), happen when colonies of algae grow out of control while producing toxic or harmful effects on people, fish, shellfish, marine mammals and birds, according to NOAA.

The red tide that occurs along Florida’s Gulf Coast every year is caused by microscopic algae that produce toxins that kill fish and make shellfish dangerous to eat, according to NOAA literature.

Reported in every U.S. coastal state, the occurrence of red tides may be on the rise.

“HABs are a national concern because they affect not only the health of people and marine ecosystems, but also the ‘health’ of local and regional economies,” the literature states.

Although some are harmful, most are beneficial, according to NOAA.