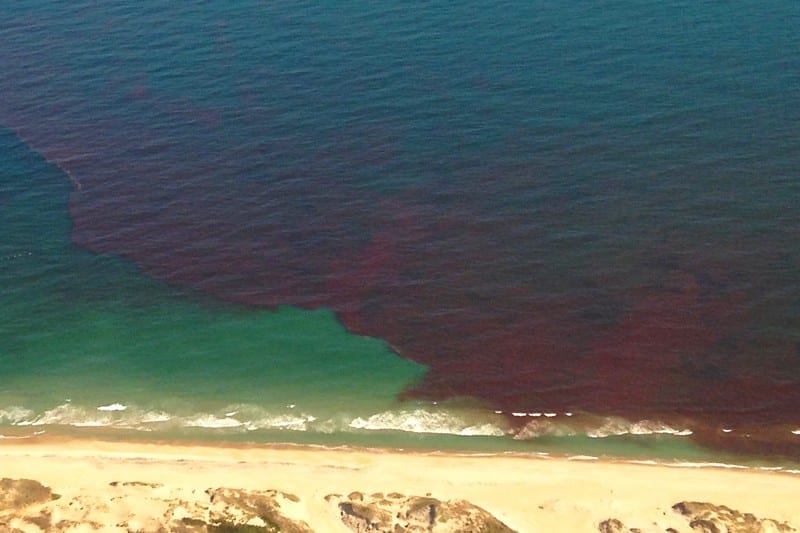 The reddish-brown tide that first appeared Monday on Bodie and Pea islands was caused by Mesodinium rubrum and does not contain toxins, a water sample showed Thursday.

The single-celled organisms belong to a group of ciliated protozoans, and large colonies of the species have been known to change ocean water to a brick red color.

Dr. Richard Stump, a NOAA oceanographer with the National Centers for Coastal Ocean Science, confirmed that the algae bloom was essentially harmless.

“Mesodinium rubrum swims quite vigorously and the swimming can get the cells to accumulate at the surface and near fronts between fresh and salt water, which would occur in the area of Oregon Inlet due to the fresh water coming from the sound,” Stumpf said. “These blooms pop up occasionally in coastal areas and are usually quite localized.”

Ciliates are common anywhere there is water. Red tides of Mesodinium rubrum typically occur after a sudden bloom of micro-algae and are most abundant in the spring and fall.

The arrival of this week’s red tide, which stretched from Oregon Inlet to Buxton, piqued the interest of ocean scientists and National Park Service personnel. It also prompted the North Carolina Aquarium on Roanoke Island to delay the release of a rehabilitated turtle rescued this summer off Avalon Pier.

Mesodinium rubrum has chlorophyll, but feeds on other smaller phytoplankton, which Stumpf said were also present in the sample.

First Flight High School Phyto Finders took the sample on Tuesday and made the initial identification before shipping it to NOAA’s South Carolina lab. The local group is part of NOAA’s Phytoplankton Monitoring Network.

What is often referred to as a Harmful Algae Bloom (HAB), or a toxic red tide, has been in the public spotlight this fall due to its annual appearance off northwest Florida. The particular Florida tide, caused by the organism Karenia bevis, is harmful to humans and marine life. The last time such a toxic red tide has been seen in North Carolina, said Stumpf, was Halloween of 1987.

Stumpf worked on-site during that bloom near Beaufort in the 1980s and said an irregular pattern in the Gulf Stream was detected at the time.

“There are many organisms that can cause a red tide. Some are toxic, like the one in the Gulf of Mexico, and some are just red,” Stumpf said earlier this week.

According to NOAA literature, less than one percent of algal blooms actually produce toxins. HABs happen when colonies of algae grow out of control while producing toxic or harmful effects on people, fish, shellfish, marine mammals and birds, according to NOAA.

Reported in every U.S. coastal state, the occurrence of toxic red tides may be on the rise. “HABs are a national concern because they affect not only the health of people and marine ecosystems, but also the ‘health’ of local and regional economies,” the literature states.