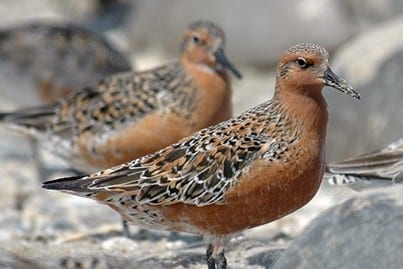 The rufa red knot, a shorebird that migrates along the Eastern Seaboard, became a protected species under the Endangered Species Act Tuesday when the U.S. Fish and Wildlife Service elevated its status to threatened.

Increasing protection of the bird, which is a subspecies of the red knot, has raised concern on the Outer Banks because of its potential to broaden restrictions on beach access during prime surf-fishing seasons.

After the change was proposed, a series of public hearings was held by the wildlife service, including one in Manteo on June 5.

According to a USFWS statement, some 1,700 scientific documents were analyzed and over 17,400 comments were received during a 130-day public comment and study period.

“Since the 1980s, the knot’s population has fallen by about 75 percent in some key areas, largely due to declines in one of its primary food resources — horseshoe crab eggs in Delaware Bay, an important migratory stopover site,” the statement said.

“Although this threat is now being addressed by extensive state and federal management actions, other threats, including sea-level rise, some shoreline projects and coastal development, continue to shrink the shorebird’s wintering and migratory habitat.

“As required by the ESA, the Service is also reviewing the U.S. range of the rufa red knot to identify areas that are essential for its conservation, known as critical habitat. The Service expects to propose critical habitat for the rufa red knot for public review and comment in 2015 after completing the required review of economic considerations.”

Local surf fishing and beach access groups, such as the Outer Banks Preservation Association, have been following the issue since the proposed elevation of status was raised in early 2014.

During this semi-annual migration in the spring and fall, the red knot uses the Outer Banks, especially Hatteras Island beaches, as a stopping point to rest and feed.

This twice-a-year appearance coincides with the region’s two most important surf-fishing seasons, which provide critical income to the Outer Banks outside of the prime tourist months.

One major tournament in the spring on Ocracoke Island and three in the fall in — one in Nags Head and two on Hatteras Island — are among the largest in the nation and require four-wheel drive vehicles on federally owned.

With the new ruling, there is concern in recreational fishing circles that the “critical habitat” designation may result in far more beach closures than those triggered by the rather small populations of breeding piping plovers that have closed beaches to vehicles and pedestrians during the summer.

Unlike the piping plover, where breeding occurs in the summer, primarily at Cape Hatteras point southward and around Oregon Inlet, red knots are found during migration along the length of Hatteras and Ocracoke islands.

Indeed, the Audubon Society website, a group that has been a party to lawsuits that resulted in beach closures along the Outer Banks in the past, lists the following concerns and actions taken by the group to date:

“Knots and other shorebirds depend upon using quiet intertidal beach locations as resting sites during higher tides. Chronic human disturbance may limit their ability to gain the fat essential for migration.

“Key to conservation efforts is the identification and protection of important Red Knot migration staging and wintering areas—among other steps, by including these habitats in the Western Hemisphere Shorebird Reserve Network.

“In South Carolina, Audubon has promoted public education as a means of reducing shorebird disturbance by beach-walkers.”