Risk to Bonner Bridge may lead to stricter limits on navigation 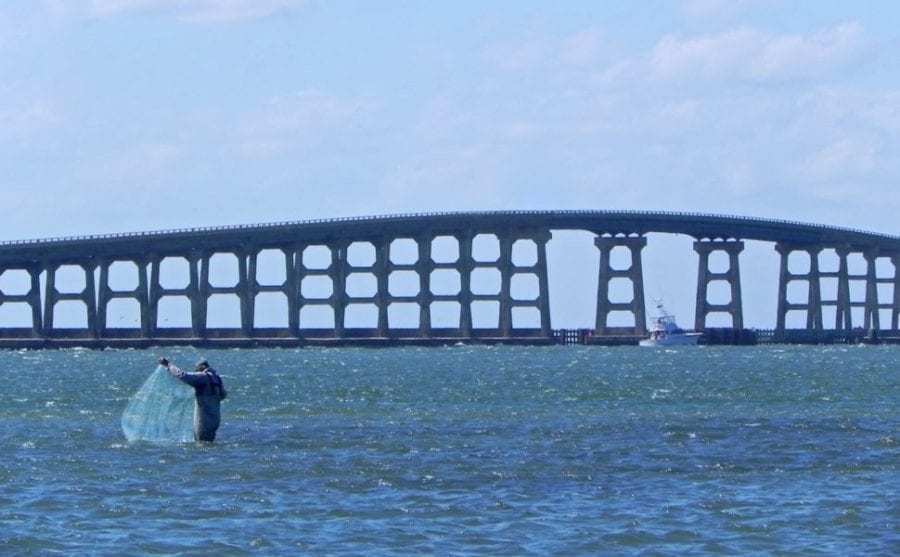 The channel under the main span is impassible. (Voice)

Warning of the potential for “catastrophic damage” to the Bonner Bridge, the Coast Guard has assumed broader power to regulate boat traffic in Oregon Inlet.

The Coast Guard said new rules allowing quick action were necessary because vessels routinely run between unprotected pilings south of the marked channel, which is essentially closed because of shoaling.

As a “temporary regulated navigation area,” the inlet will be subject to limits on the tonnage and draft of vessels if conditions increase the risks to the bridge.

The Captain of the Port will make the decision. A notice in the Federal Register said limits can be imposed without advance warning if the risk is immediate.

“The Coast Guard will impose restrictions only when necessary based on inlet conditions, and will provide the public with as much advance notice as possible,” a Coast Guard statement said.

Generally, the Coast Guard is responsible only for federal channels and has discouraged using other routes under the Bonner Bridge but has not had the power to prevent it.

Enforcement power anywhere within 100 yards of the span is essential now “to reduce the risk of a bridge strike resulting from a vessel transiting through alternative spans of the Herbert C. Bonner Bridge, which are not intended for navigation,” the notice said.

“A bridge strike to un-fendered or unprotected structural elements of the Bonner Bridge would introduce a clear and present danger to stability of the bridge, motorists, mariners, and indirect impacts on local businesses and residents of Hatteras Island, NC.”

The Coast Guard said in the Federal Register that it needed to impose the designation immediately because “waiting for a comment period to run is impractical as it would expose the public to a longer danger period.”

Comments are still being accepted through Feb. 17. After that, the Coast Guard could be authorized to continue the broader regulations indefinitely. A public hearing has not been scheduled, but the notice said one would be considered if it is requested.

A survey Dec. 3 by the Army Corps of Engineers shows depths as little as 3 feet in the channel, indicated by the brackets on the left.

The notice said that a recent bridge inspection by the North Carolina Department of Transportation “noted weakened pile supports as a result of section loss and substructure erosion to the point of showing exposed rebar.”

Meanwhile, she said, Chairman Bob Woodard has appealed for help from Gov. Pat McCrory after the Board of Commissioners was told Monday night that Oregon Inlet is essentially closed due to shoaling. The grim assessment was was delivered by Jim Tobin, chairman of the Oregon Inlet Task Force Advisory Committee. See the full letter »

Under recent contracts for just over $1.2 million, repairs will be made to the underside of the bridge deck and to steel support braces on the south end of the span.

Efforts to replace the 50-year-old bridge with a new parallel span have been delayed by a lawsuit filed by environmental groups. The state has awarded a construction contract for the work, and the parties in the suit are now trying to work out a compromise.

The source of contention is the plan to manage problems along N.C. 12 between the inlet and Rodanthe with a series of bridges and beach nourishment in the Pea Island National Wildlife Refuge. The environmental groups are pushing for a longer bridge around the old right-of-way, which routinely washes out during storms.

Even after a massive emergency dredging project costing $7 million last year, the inlet quickly filled with sand again. A survey earlier this month showed the navigation channel and areas south of it shoaled to as little as 3 feet or less.

Vessel groundings have become more frequent, but the prospects for reliable federal funding are dim. Some of the maintenance dredging is being done by the U.S. Army Corps of Engineers through Memorandums of Agreement that allow the state to provide the money.

Engineers say that the new parallel Bonner Bridge will be built to allow vessels to pass much farther south, where depths exceed 30 feet.

Oregon Inlet is the only passage to the Atlantic on the northern Outer Banks. Commercial fishing vessels and charter boats can use Hatteras Inlet, which to most is impractical. In addition, Hatteras Inlet is facing its own problems with shifting shoals.