Great white shark tracked over the weekend in Pamlico Sound 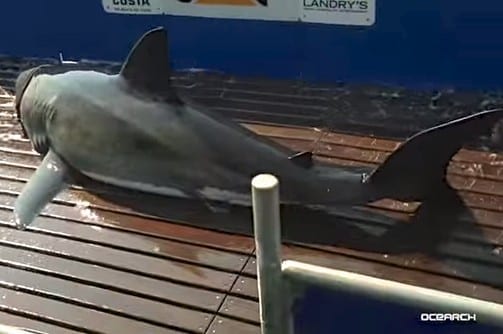 A 14-foot-long great white shark tagged in 2013 off Cape Cod was tracked inside the Pamlico Sound over the weekend but appears to already be cruising well south of the Outer Banks.

Named “Katharine” by OCEARCH, the 2,300-pound female shark was initially located Friday evening inside Pamlico Sound northeast of Stumpy Point Bay. A tracking device on her dorsal fin sends a signal whenever it breaches the surface of the water.

The next “ping” turned up Saturday morning near the mouth of the Pamlico River, then Saturday afternoon off Cape Hatteras, back in the Atlantic Ocean.

But did a shark of Katharine’s size realistically enter the sound at Oregon Inlet and exit through Hatteras Inlet?

“I think its real. Satellite tracking has been pretty accurate to this point,” Brian Dorn, director of husbandry and operations at the N.C. Aquarium on Roanoke Island, said Monday “(The OCEARCH researchers) were surprised she went in that far. (But) they’ve seen similar trackings on other great whites.” 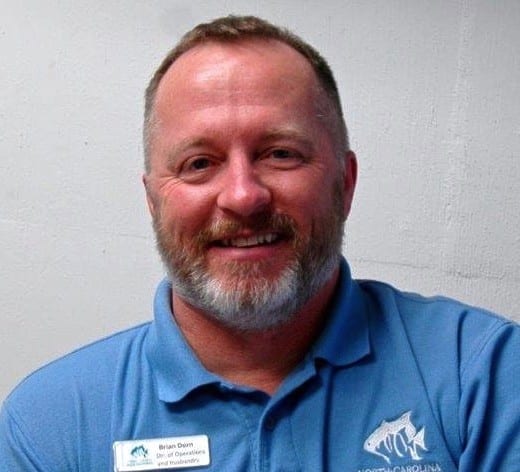 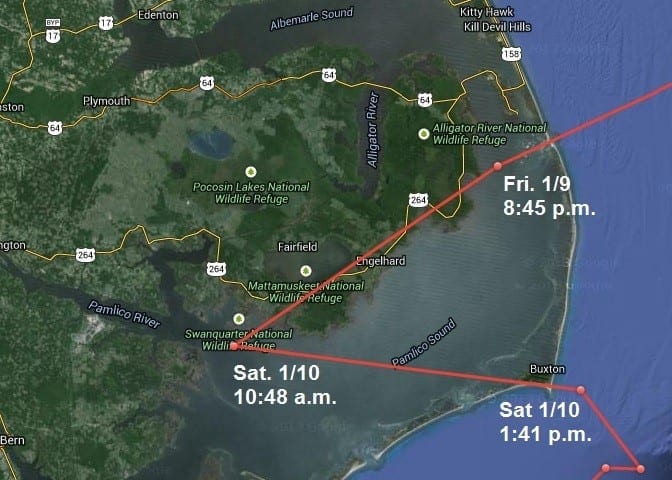 “She may have sensed there was food up there,” Dorn said. “It may have just been a exploratory passageway she took in there, not necessarily even smelling food, just traveling through the local waters.

“But Katharine not staying in the sound very long probably was because of the conditions of the mostly brackish estuary, especially on the western side.

“Once its gets a little bit fresher, she probably wanted to find a way out, and she did.”

And no, it shouldn’t be considered strange or alarming that a fish the size of Katharine could be found in the relatively shallow waters of Pamlico Sound, although there are water depths of up to 20 feet in some areas.

“The don’t need their sight all that well to navigate, and they have really good sensory organs around their body,” Dorn said.

After spending Saturday over Diamond Shoals, Katharine has headed only a bit farther south, popping up to the surface multiple times through Monday off the uninhabited Core Banks and Cape Lookout National Seashore.

Katharine was captured and tagged off Cape Cod in 2013 aboard a custom built-vessel, the M/V OCEARCH, which uses a hydraulic platform designed to safely lift mature sharks for access by a multi-disciplined research team. Up to 12 studies are conducted in approximately 15 minutes on a live mature shark before its released.

Ocearch is a non-profit that tags and tracks sharks on computer software available to the public.

Details about Katharine, including live tracking data, can be found at www.ocearch.org/profile/katharine/.

Get more information about programs at the North Carolina Aquarium on Roanoke Island at www.ncaquariums.com/roanoke-island.