Fast-moving pickleball is catching on with OBX seniors 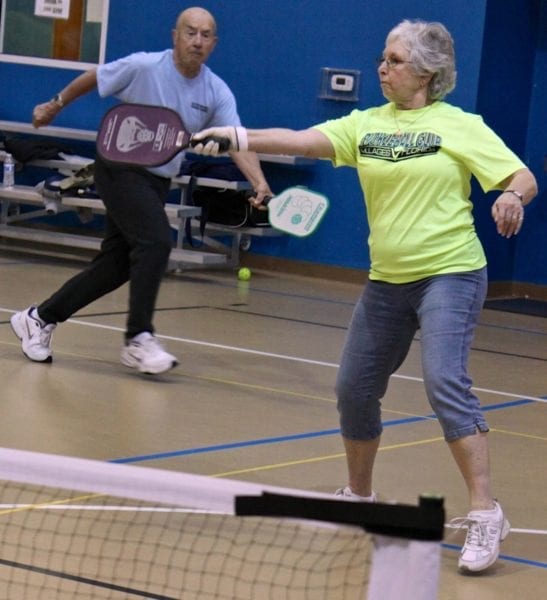 What are all those “old people” doing every week over at the Rec Park in Kill Devil Hills? Playing pickleball.

Pickleball’s a crazy cross between badminton, tennis, ping pong and wiffle-ball, and has been sweeping the nation since its inception in 1965. Over-age-55 communities from Arizona to Florida proclaim it as the fastest growing sport in the United States.

Outer Banks senior citizens aren’t arguing the statement. Dozens of them flock to the nets and try not to miss any of the three organized days of local play weekly.

Created by some bored family members and friends on the West Coast, their idea was to come up with something the whole family could play together. Throw into the mix a low, 36-inch-deep net, some paddles and a perforated polymer ball on a badminton-size court, and you have one lightning fast game.

Organized here a few years ago by Lynn Brooks, who coordinated with the Baum Center, the sport took off and continues to grow and grow, said Emily Gould, program coordinator for older adult services at the center. She said Parks and Rec created an indoor space for playing, and “it has certainly been up and coming and constantly getting new members year over year.”

There’s a variation of tennis rules, and the court is so small, and the ball scoots so fast, the players are constantly moving, bending, jumping and reaching; also sweating and enjoying each other’s company, Gould noted.

“We’ve got a solid group for exercise and camaraderie,” she said, “and it is a well rounded exercise — testing you mentally and physically. You are certainly on your toes all the time.”

The seniors range in age from the 50s to 80s, and the group has even hosted some players in their 90s. Veteran Pickleballers Lew and Judy Gregory are the group’s current leaders and instructors. They cut their teeth on the sport at the Villages in Florida. It’s a huge active senior community, boasting more golf carts than New York has taxi cabs, and Pickleball is king.

The Gregorys said, “We both fell in love with the game. As we get older, it’s very important to stay active. Pickleball is an excellent way to do so, and have fun. It’s a game that can be enjoyed by all ages.”

Lew said Pickleball has now been recognized in the North Carolina Senior Games competition coming up in April. Winning contestants locally can advance to regional and state contests.

One of the group’s charter members is Roy Spencer. He’s 83 and is lauded for his technique . “He’ll loft a lob and when it lands you swing at it, but the ball isn’t there,” said one of his friendly anonymous competitors. “Oh yeah, he is the king of spin.”

Roy was an avid badminton player, and managed the Senior Games tourney here for many years.

“But when Pickleball started, nobody played badminton anymore,” he said, adding that the new sport is so enjoyable and social, it becomes a special part of one’s life.

“It’s the pleasure of good company and exercise combined,” he said. “It has really helped me with my blood pressure and cholesterol. I have benefited from the exercise and just from the moving and doing things like stretching and running, and activities you would not normally do. And getting out of the house meeting people, keeping some of that competitive edge. It keeps the legs going and heart beating. It’s just a good thing.”

On the other end of the spectrum is Melody (Mel) Alley. She’s just learning the game, but is already hooked.

“I am having a blast. All of the experienced players have been extremely patient, helpful, and encouraging. Each day I play I can’t wait until it’s time to play again. The exercise is awesome and so much more fun than a boring workout,” she said.

“They love it,” Emily Gould added. “It’s all positive. During the summer I get some visitors peeking their heads into the office and excited we are playing here. It’s fun and it’s serious, too. Because you take what you love seriously.”

Spencer agreed Pickleball has been a draw for tourists who often come to the Outer Banks, in part, because they can play the game here. He said the group has extra paddles for visitors, and there is no charge for them to play.

The investment in such enjoyment has been only a few hundred dollars for portable nets, balls and paddles, since inception. And seniors age 50 and over are invited to learn the game when the group meets Tuesdays and Thursdays from 9:30 a.m. to noon, and Fridays from 1 to 3:30 p.m.

Seniors can get more information by attending or going to the group’s Facebook page at Pickleball Outer Banks NC.

Emily hasn’t figured it all out yet, but she is thinking it might be fun to involve different age groups and hold a Pickleball tournament on the Outer Banks. Seems Pickleball isn’t limited to seniors, and perhaps it would help raise some funds to potentially build an outdoor Pickleball court at the Baum Center. (Ships Watch in Duck also has an outdoor court and cordially invites the local seniors to play.)

USPA said three years ago there were seemingly only a few dozen players in the Triangle. Today, there are about 500 active players in the area, with another 500 registered as members of Pickleball Carolina.