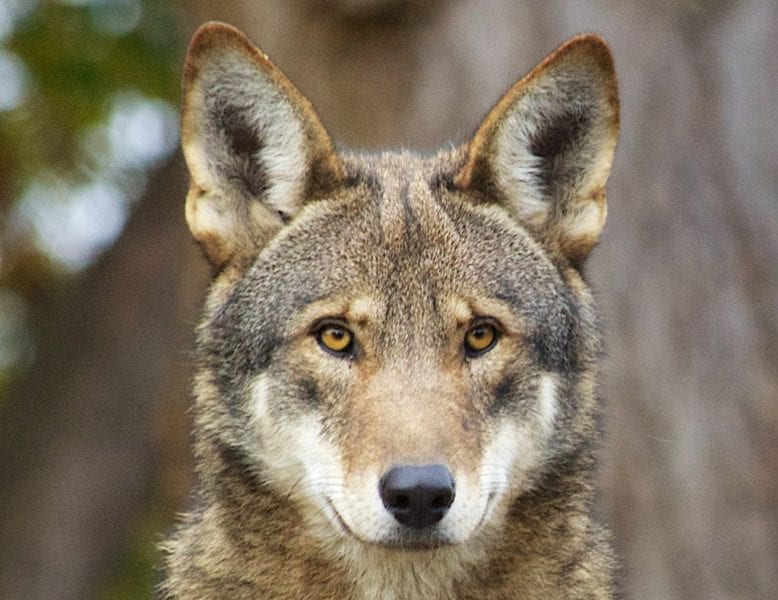 The red wolf was once considered extinct in the wild.  (USFWS)

State wildlife regulators are calling on the U.S. Fish and Wildlife Service to end the reintroduction of the red wolf in the region and to remove all wolves that were released on private lands in Dare, Hyde, Tyrrell, Washington and Beaufort counties.

The N.C. Wildlife Resources Commission on Thursday adopted two resolutions that cited interbreeding with coyotes, encroachment onto private lands and a failure to meet project goals as reasons to end the program in North Carolina.

The Wildlife Commission also said that 64 releases of red wolves by the Fish and Wildlife Service were intended to be done on federal land but actually took place on private land and therefore were unauthorized. The commission said the wolves and their pups should be recaptured.

The U.S. Fish and Wildlife Service released a 171-page, peer-reviewed evaluation in November 2014 to address deficiencies and determine the program’s future in eastern North Carolina, with a broader announcement on an overall decision expected in early 2015.

Red wolves were declared an endangered species in 1967 and then extinct in the wild in 1980. Some 200 red wolves are held in captive breeding facilities across the United States. One is in the Alligator River National Wildlife Refuge in northeastern North Carolina just west of the Outer Banks.

The commission also approved on Thursday temporary rules that will allow conditional daytime coyote hunting in the five-county red wolf re-introduction area by individuals issued an authorizing permit, and approved the designation of the red wolf as a state-listed threatened species under temporary rules.

The action results from a lawsuit brought by the Southern Environmental Law Center on behalf of the Red Wolf Coalition, Defenders of Wildlife and the Animal Welfare Institute against the N.C. Wildlife Resources Commission.

The suit alleged the Wildlife Commission violated the federal Endangered Species Act by allowing coyote hunting in the five-county area.

As amended, the temporary rules approved by Wildlife Commissioners will allow daytime coyote hunting from one-half hour before sunrise to one-half hour after sunset on private property in Dare, Hyde, Tyrrell, Washington and Beaufort counties with a coyote hunting permit that will be available online in the future.

Coyote hunting on public land will require a special permit issued by agency staff. All hunters will be required to report coyotes killed in the five-county area.

In North Carolina’s other 95 counties, hunting regulations allow coyote hunting on private land at any time, day or night, with no bag limit, and on public land at night with a permit.

Public hearings have been scheduled for Tuesday at Columbia High School, and Feb. 17 at the Wildlife Commission headquarters in Raleigh.

Public comments are being received through March 16 on permanent rules for conditional coyote hunting in the five-county area, as well as designation of the red wolf as a state-listed threatened species.

Comments on permanent rules also can be made through March 16 online at https://ncpaws.org/PAWS/WRC/PublicComments/PublicEntry/PublicComments.aspx or by letter to N.C. Wildlife Resources Commission, 1701 Mail Service Center, Raleigh, N.C. 27699-1701.