Though limited, wave energy could pay dividends on the OBX 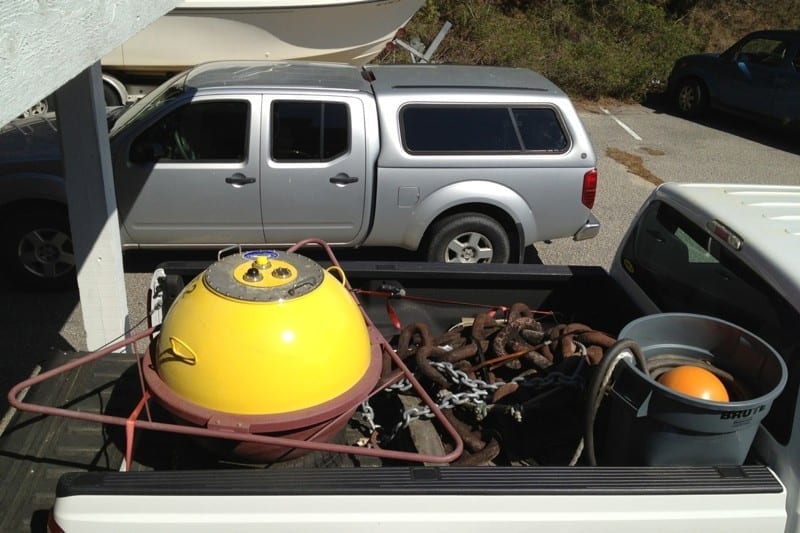 The better news, they said, is the Atlantic Ocean serves up wave action well-suited for research and testing devices.

In late 2002, the North Carolina Aquarium Society saved the old wooden Jennette’s Pier from the wrecking ball. Ten months later it was destroyed by Hurricane Isabel.

The new concrete pier’s mission is to create oceanfront educational programs in support of the North Carolina Aquarium. Bt 2004, UNC CSI had partnered with the pier with a mutual objective to create an Ocean Observing station, which has evolved into an Ocean Energy Research Platform at the end of the new pier.

But “it wasn’t research for the sake of research,” Remige added. The greater goal was to generate electricity from the ocean for use in North Carolina. And to create ocean energy-related jobs and educational opportunities. 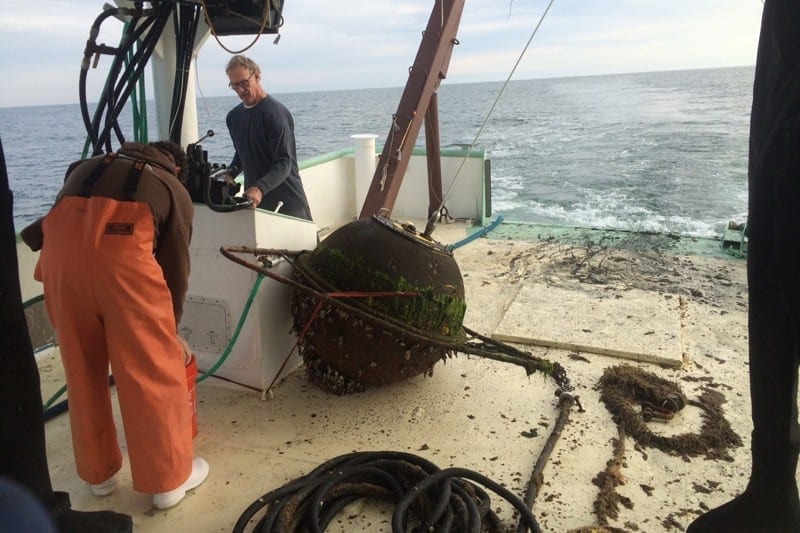 It took two months to refurbished the Waverider buoy. (CSI)

But Remige said North Carolina’s Outer Banks and the Ocean Energy Research Platform at Jennette’s Pier is a great place for companies to test their products.

Dubbs said people’s perceptions of our waves being too volatile are just the opposite, at least compared to the those in Alaska and some locations on the West Coast. And the general weather conditions and equipment available for research support at Jennette’s Pier are attractive to energy development companies.

If wave action can’t generate grid-scale electricity here in the foreseeable future, Remige and Dubbs believe it can still be lucrative. The platform is currently available for use by the private sector on a fee schedule, thanks to infrastructure upgrades from a $260,000 investment by UNC CSI, he said.

The two said that Resolute Marine Energy Inc. was the first company to make use of the facility to test their Surge Wave Energy Converter in the open ocean. They deployed the device from a small crane off the end of the pier, then monitored its performance using equipment installed in the research operations building on the platform.

According to UNC CSI literature, the building can sustain a Category 3 hurricane and offers fiber optic connectivity and generator back-up power that would sustain experiments in the event of a power outage. UNC CSI has outfitted it with a server to store and provide remote access to instrument data.

The research operations building at the ocean end of the pier is climate-controlled and houses a trap door and a winch and basket system that allows researchers and divers access to the water and center pilings. In addition, a soon-to-be-installed cable trough will protect cables running to instruments.

Dubbs and Remige are banking on developers giving the Outer Banks their business, and they said the chances of that will increase with the 2015 publishing of the U.S. Wave Energy Converter (WEC) Test Site catalogue by Sandia Labs.

This national government report provides ocean data and wave energy characteristics at a handful of U.S. test and potential deployment sites. This year, Jennette’s Pier and the Duck Research Pier will be included in the report and will be among the first East Coast locations noted.

Remige said, “Think of all the high-tech jobs that could be made here, expanding our local economy in areas not even considered before. If the Outer Banks economy is going to grow, it’s not going to be all about tourism. Niche industries such as oceanic research may be the key to new economic growth, going forward.”