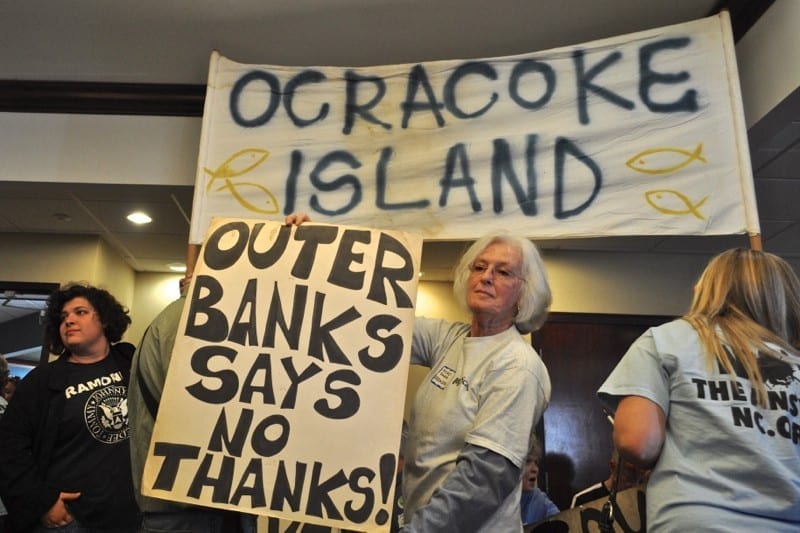 That is how Briggs McEwan, owner of Lisa’s Pizzeria, summed up his view regarding the risks of offshore drilling at the Comfort Inn in Kill Devil Hills on Monday night.

And McEwan was far from alone in expressing his opposition to ocean exploration for oil and gas off the coast of North Carolina.

According to sign-up sheets at a public meeting held by federal officials in the neighboring Ramada Inn, more than 600 people showed up.

The Comfort Inn gathering was organized to rally opposition.

Open supporters of offshore drilling were hard to find, and two visits to a first-floor meeting room at the Ramada hosted by the pro-drilling American Energy Works at the Ramada turned up no more than two or three people milling about.

The federal Bureau of Ocean Energy Management (BOEM), charged with overseeing over 1.7 billion acres of offshore submerged lands, was hosting one of two dozen public meetings andcomment sessions along the East Coast to explain the process set in motion by President Obama’s decision in January to offer five-year leases to explore the mid-Atlantic continental shelf for possible oil and gas reserves.

The public meeting allowed visitors to visit six stations that explained the “scoping process,” the first of many steps the federal government must go through before any exploration or extraction can take place. 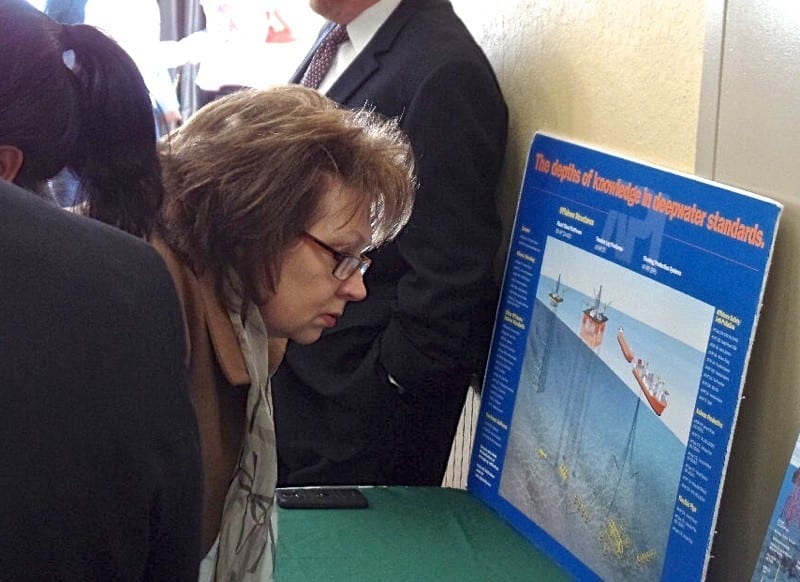 An open house held by the federal BOEM at the Ramada explained the process and solicited comments. (Ed Beckley)

BOEM is a neutral party in the debate over offshore exploration and drilling.

Its role was to provide the public with an opportunity to understand what the Obama Administration was proposing and the various stages in the process. The aim also was to provide citizens a chance to express their opinions.

Comments submitted at the meetings and through other means will be taken into consideration as the federal government moves through Environmental Impact Statements and exploration of alternative uses of offshore lands along the continental shelf.

Judging by the signs and shirts, more than two thirds of the crowd at the Ramada opposed offshore exploration and drilling.

Meanwhile, back at the Comfort Inn, close to 300 people packed a small meeting room, with another hundred standing outside to hear a parade of elected officials, business owners and citizens stride to a microphone and urge the public to reject offshore drilling.

The gathering was organized by Ivy Ingram, vice-chair of the Outer Banks Chapter of the Surfrider Foundation and a spokesperson for NotTheAnswer NC.org.

Two Manteo High School juniors also made remarks opposed to drilling and the crowd responded with generous applause and cheers as the young adults made their points.

If one came to the meeting looking for the typical divide and fireworks between business interests and environmental groups, one would have left disappointed. 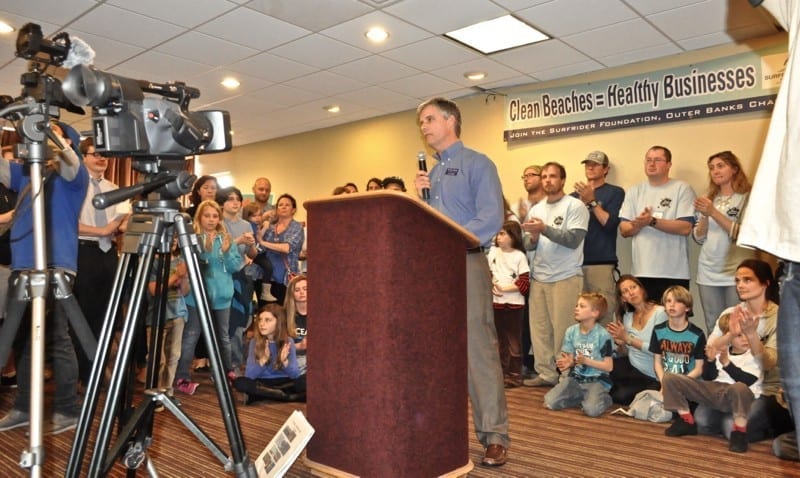 Lee Nettles, who heads the Outer Banks Visitors Bureau, was among the speakers at the Comfort Inn. (Russ Lay)

Environmentalists and business interests came together on one common theme — the risk-reward ratio of drilling versus other energy uses offshore, particularly wind power.

While current estimates of off-shore oil and gas reserves vary widely, opponents expressed the beliefs that reserves lying beneath North Carolina’s offshore continental shelf are too small to make a dent in energy prices, North Carolina jobs or independence from foreign oil producers.

Given those beliefs, every speaker and a vast majority of those attending thought the potential damage to beaches, tourism, and fishing industries far outweighed any benefit. They essentially cast supporters as Las Vegas gamblers going for broke and depending on a perfect alignment of the stars to prevent what the majority felt was not “if but when” an oil spill would occur.

While the process has a long way to go and facts in support of drilling are scarce at the moment, on Monday night, it appeared opposition to offshore drilling was the overwhelming sentiment of local business, political and environmental representatives.

Look for video coverage on The Outer Banks Voice later this week.