Rumbles felt up the East Coast, but no earthquake recorded 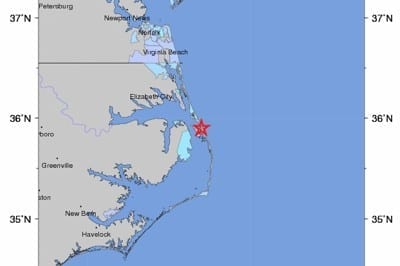 The USGS is not classifying the rumblings as earthquakes.

The U.S. Geological Survey wants to hear from coastal residents about two rumbles that shook houses from the Carolina coast to Delaware Monday, but the federal agency’s instruments detected no earthquakes in the region.

Unlike the occasional booms heard and felt along the Outer Banks from time to time, Monday’s rumbles lasted as long 20 seconds. The first occurred at 4:24 p.m., according to the U.S. Geological Survey, and the second at 6:24 p.m.

When the 5.8-magnitude earthquake in Virginia shook our region in August of 2011, it was reported within minutes by the USGS.

John Bellini, a geophysicist with the USGS, said the rumblings were definitely not earthquakes, but they were reported as far north as Delaware and as far south as Havelock in North Carolina.

The USGS website marks the incident in Nags Head and provides a link asking, Did You Feel It? — Tell Us! By noon it had recorded 201 responses from 45 zip codes.

Offshore training by the Navy and possibly sonic booms from jets are often the explanation. Occasionally, speculation centers on the Harvey Point Defense Testing Activity in Hertford.

Bellini said a weather system was offshore Monday. Rumbles of thunder can travel much farther over the water than over land, he said. The USGS receives three or four reports a year from the region inquiring about the possibility of an earthquake, he said.

Then, of course, there’s the theory of the Seneca Guns.

A 2.8-magnitude earthquake was recorded in Louisa County Sunday near the center of the 2011 temblor, according to Inside Nova. Bellini said it was one of a number of aftershocks from the 2011 earthquake.

Meanwhile, see what people are saying on our Facebook page.