What causes dolphins and whales to strand along the coast? 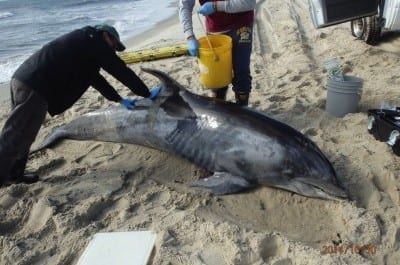 David Mickey, left, helps with a dolphin necropsy after finding the dead animal stranded on Ocracoke in October. (Vicky) Thayer

OCRACOKE – It was not a pretty sight for David Mickey and Sue Dayton the fall day they came upon a large dark object on the beach. Walking closer, they identified what they had spotted as a dead bottlenose dolphin.

Disturbed, they called the Marine Mammal Stranding coordinator for North Carolina’s central coast, Vicky Thayer. She came to the island and, with Mickey’s assistance, performed a necropsy on the animal.

Mickey and Dayton had just moved to Ocracoke, and this was their introduction to the series of dolphin strandings in mid-Atlantic waters last year.

Over the next couple of months, two more dolphins would be found stranded on the island.

According to Thayer, the number of strandings varies from year to year, but there was an increase of bottlenose dolphin deaths from July 2013 to June 2014 in North Carolina, due in part to a virus known as dolphin moribillivirus. Of the three dolphins that were stranded on Ocracoke Island last winter, one tested negative for morbillivirus and results from the others are not completed.

The deaths were part of the largest number of strandings of bottlenose dolphins and small whales ever recorded on the East Coast, said William McLellan, state stranding coordinator at the University of North Carolina Wilmington. A similar morbillivirus outbreak took place in 1987-‘88, killing up to half the bottlenose dolphin population in the mid-Atlantic during an eight-month period.

Concerned, Mickey and Dayton helped arrange for Keith Rittmaster, the natural science curator at the North Carolina Maritime Museum in Beaufort, to visit Ocracoke and give a presentation on his work with whales and dolphins. Rittmaster has been involved with many strandings, also known as beachings, that have occurred here over the years.

Entanglement in fishing line, nets and anchors; ingestion of trash, including life jackets and milk jugs; injuries from propeller blades on boats and ships; shark attacks and sting ray barbs; and viruses, bacteria and parasites are among the causes of death in marine mammal strandings described by Rittmaster. He accompanied the descriptions with slide depictions of the many beached whales and dolphins he has studied.

Whales, dolphins and porpoises, known collectively by scientists as “cetaceans,” have intrigued humans for centuries, as evidenced by the nearly full house Rittmaster’s presentation attracted. North Carolina’s coastal waters are home to at least 33 species of marine mammals; and, of the 10 “great” whales that exist, eight have been documented offshore here, according to N.C. Aquariums.

There are toothed whales, known by the scientific name odontoceti, of which the sperm whale is the largest. There are also baleen whales, or mysticeti, including humpback, blue, North Atlantic right, fin, sei and minke whales. Baleen whales are so called because instead of having teeth, they have racks of baleen — hanging sheets of fringed keratin that filter and trap small fish, shrimp, and krill.

Two species of pilot whales, several species of dolphin and one type of porpoise swim off North Carolina’s shores, of which bottlenose dolphins are the most frequently seen. Harbor porpoises and Atlantic spotted dolphins are also abundant.

Two factors play a role in the great diversity of marine mammals off our coast, explained Rittmaster. Warm water of the Gulf Stream, coming from the south, mixes with the colder water of the Labrador Current, streaming from the north, near the N.C. coast. It is also where the inner and outer continental shelves meet, with the same result.

North Carolina’s coastal native people probably took advantage of the beached whales that washed ashore, using their meat and blubber. It was not until the Europeans arrived that the animals were hunted for their blubber that was boiled to extract its oil. This brought several species to the brink of extinction. Oil from the sperm whale was used for lubrication, that from the humpback for lighting and oil from the lower jaw of dolphins for lubrication of fine machinery and watches.

Today cetaceans are protected by the federal Marine Mammal Protection Act and the International Whaling Commission. The most endangered species, the North Atlantic right whale (called so because in former times it was the “right” whale to hunt) appears to be making a slight comeback. This winter 14 right whale calves were born off the Southeast, a number that relieved conservationists who feared there would be fewer.

The National Oceanic and Atmospheric Administration recently proposed expanding the designated critical habitat for the endangered right whales, including a portion of the southern N.C. coast where they have calves and nurse. Overall, the rule would expand their critical habitat to almost 30,000 square nautical miles.

Scientists are worried about the Navy’s sonar testing off the N.C. coast, which they think can adversely affect cetaceans. Thirty-four whales of three different species were stranded and died along the Outer Banks in January 2005 following offshore Navy testing using sonar. While there was no definitive proof that the tests caused the beachings, they were, according to McLellan, “investigated as an acoustic event, and it could not be ruled in or out.” Sonar tests are also, he added, “levels of harassment,” that may contribute to aberrant cetacean behavior.

There are many reason why marine mammals beach themselves, Thayer explained. “People want a simple answer, but it’s not that easy,” she said. “It’s very difficult to determine cause of death and there have not been many cases worldwide that have been definitively attributed to acoustic trauma. Numerous factors can combine to cause marine mammal strandings, although the burden of proof should be on the group causing the potential harm.”

Joel Reynolds, senior attorney for the Natural Resources Defense Council, thinks differently. “There is no question that sonar injures and kills whales and dolphins,” he said in 2008. According to the defense council, sonar can cause bleeding around the brain, ears and other tissues and large bubbles in organs, similar to the bends, which sometimes kills divers who surface too quickly.

The magazine Scientific America writes that sonar sound waves travel hundreds of miles under water and retain intensity of 140 decibels 300 miles from their source. “Evidence shows that whales will swim hundreds of miles, rapidly change their depth, sometimes leading to bleeding from ears and eyes, and beach themselves to get away from the sounds of sonar,” notes an excerpt.

Seismic air guns, which cause similar effects as sonar, are proposed to be used off the N.C. coast, starting this year, to search for potential reservoirs of oil and natural gas. McLellan says that seismic exploration along North Carolina’s coast was conducted last by the National Science Foundation and the Lamont-Doherty Earth Observatory at Columbia University to look at the ocean floor and channels and study continental drift.

Thayer says that efforts are made to insure that cetaceans are beyond a tolerable radius of seismic air gun use, a radius in which air guns are assumed to have the potential of altering cetaceans’ health or natural behavior. But, she explains, marine acoustics and its relation to cetaceans is complex. Beyond having direct physical effects on cetaceans or their behavior, seismic exploration and related activities — boat use, leaks, spills — may have indirect effects by affecting cetaceans’ ability to find and capture food, hear approaching predators and find mates.

The Federal Bureau of Ocean Energy Management approved opening an area of the Atlantic Coast from Delaware to Florida for the seismic blasts, saying if precautions are followed, then the seismic exploration “should not cause any deaths or injuries to the hearing of marine mammals or sea turtles.” The N.C. Division of Coastal Management is currently evaluating three permits for such testing.

Some federal scientists, are worried about what such extreme pulses of sound can do. “It’s been pretty well documented that seismic surveys have disrupted animal behavior and animal communication,” said Danielle Cholewiak, a senior acoustics researcher for the National Oceanic and Atmospheric Administration.

Jessica Weiss Taylor, who leads the Outer Banks Center for Dolphin Research, said, “There is a likely chance they (dolphins) would be affected by the seismic testing.”

The environmental group Oceana says the seismic blasts threaten to injure or kill thousands of Atlantic marine mammals, and even pose a threat to the area’s fisheries.

The American Petroleum Institute maintains that the seismic blasts are safe: “Operators already take great care to protect wildlife, and the best science and decades of experience prove that there is no danger to marine mammal populations.”

A federal environmental impact statement released in February stated that most effects to sea life would be “negligible or minor, and no major impacts were identified.”

According to Doug Nowacek, associate professor of conservation technology at the Duke University’s marine lab in Beaufort, air gun blasts may be heard underwater over distances of more than 2,000 miles. “If there’s a survey in Virginia, under conducive sound travel conditions, you’re going to hear it in southern North Carolina easily.”

Nowacek says there has been far too little data collected on the effects of the seismic air guns, and he is cautious of industry assertions that air guns are harmless.

What to do if you see a stranded marine animal

The Marine Mammal Center recommends these steps if you come across a beached seal, whale or dolphin:

Don’t touch, pick up, pour water on or feed the animal. They are wild animals and can bite. They also are easily stressed by humans.
Don’t return the animal to the water. Seals temporarily “haul-out” on land to rest. Harbor seal mothers often leave their pups ashore while they’re feeding at sea. A beached whale, dolphin or porpoise should be reported immediately.
Observe the animal from a distance of at least 50 feet. Keep people and dogs away.
Note physical characteristics such as size, presence of external earflaps and fur color. This helps us determine the species, what rescue equipment and volunteers are needed.
Note the animal’s condition. Is it weak and underweight? Are there any open wounds?
Does the animal have any obvious identification tags or markings?
Determine the exact location of the animal in order to provide accurate directions to rescuers.
The National Oceanic and Atmospheric Administration recommends calling these numbers if you come across a stranded marine mammal or sea turtle: