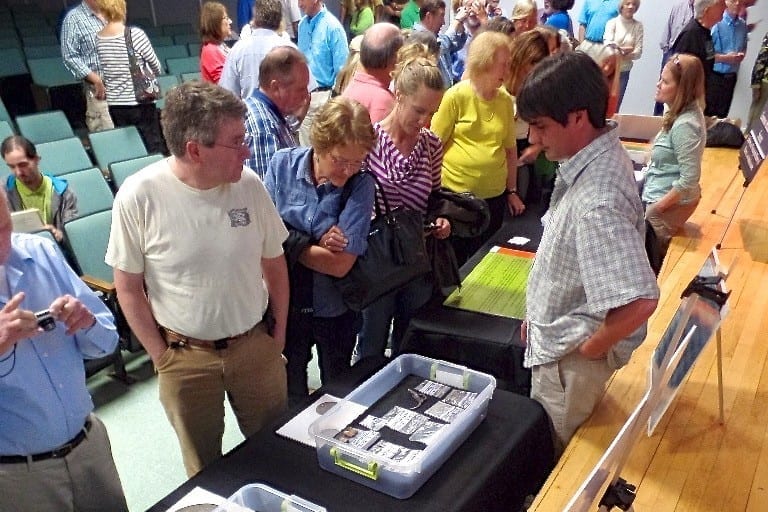 Those attending the gathering at COA in Manteo saw artifacts discovered on Hatteras Island. At right is Scott Dawson and behind him is his wife, Maggie. They founded the CAS. (Ed Beckley photos)

“Overwhelming circumstantial evidence” shows that some of the 1587 colonists, proclaimed so many years as lost, lived for generations on Hatteras Island and assimilated among the Croatoan Tribe of the Native-American Manteo, the chief archaeologist for the Croatoan Archeological Society says.

Mark Horton, professor of archaeology at the University of Bristol, United Kingdom, said Friday that two “star finds” in the past week, coupled with seven years of supporting artifacts, strengthens the case that something of “exceptional importance for American history” had been unearthed.

At a gathering at College of The Albemarle in Manteo, dozens of people saw, close up, rack after rack of artifacts brought to light by the group’s all-volunteer archaeologists, made up of about a dozen students from the UK and local residents who support the non-profit CAS and have a passion for determining the fate of the 16th Century John White colony. 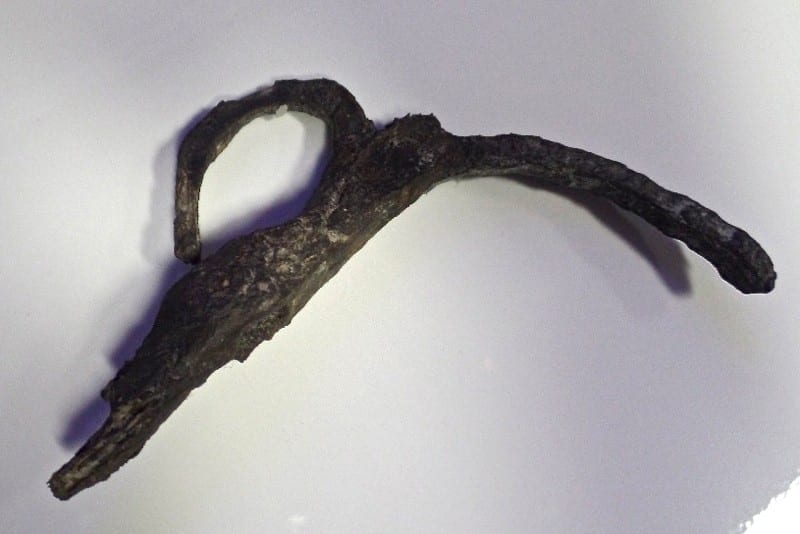 This partial handle of an Elizabethan rapier is an important find the group uncovered on Hatteras Island in the past week.

The two star finds were on display, discovered on private land at Cape Creek. They are a rusted piece of an Elizabethan era rapier handle, and a small slate writing tablet, onto which an educated colonist could scratch out words. The tablet showed such scratches, and seemed to still have the letter “M,” on it.

Horton said the team convenes for up to three weeks annually and has been focusing on five Hatteras Island sites, which are at Jeannette’s Creek, the Cape Hatteras Secondary School grounds, Frisco, Hatteras Village and Cape Creek.

Hatteras citizens Scott and Maggie Dawson founded CAS in 2009. Scott Dawson said, “If you read the history, it’s clear. Manteo (the Native American leader) is from Croatoan on Hatteras Island, and it was the only tribe that didn’t kill the colonists, and fed them.”

The story goes that Governor John White had gone back to England in 1587 for supplies for his colony, sponsored by Sir Walter Raleigh. When he got back to Roanoke Island three years later, he found the letters CRO carved into a tree, and the word Croatoan knifed into a palisade post. 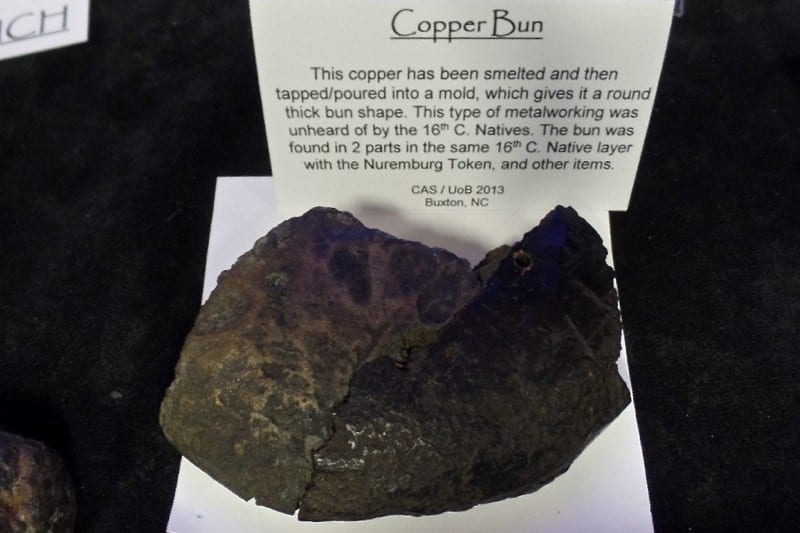 Dawson said a prearranged “cross” symbol that would have signaled distress was not present.

“It was a message indicating the colonists had simply gone with Manteo down to Hatteras, where the Croatoan Tribe lived,” Dawson said. “If someone leaves you a note saying meet them at Burger King, why would you go to Wendy’s? And when you understand this wonderful brotherhood that existed among these natives and colonists, right from the very start, along with the poor relationship that existed between the colonists and the mainland natives, it makes sense.”

Horton said CAS focused “on the science and the archaeology,” and he explained the history of Hatteras Island going back thousands of years B.C. He remarked that Hatteras was a wonderful place to live, where food from the land and sea, from hunting, farming and fishing was plentiful.

It was a place, he said, where significant numbers of people lived, based on the massive number of deer, turtle, fish and bird bones CAS has found, and the “tons and tons of shellfish” remnants. 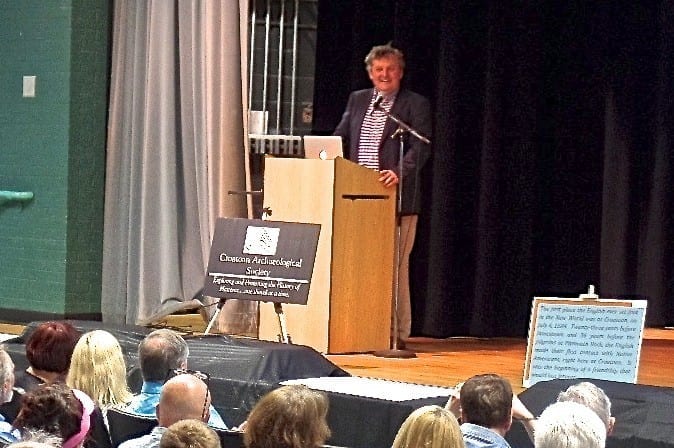 Professor Mark Horton told the audience at least some of the Roanoke colonists made their way to Croatoan, where they assimilated with the Native Americans over the generations.

The professor went into great detail on the important artifacts CAS uncovered in the past seven years, from tobacco pipes to sewing needles, and the key of a fob watch, to copper rings, a gold signet ring, and wine and window glass. They found several post holes representing domestic residences, including the remnants of a hearth fire.

“I think we’re now getting persuasive evidence that there were a significant number of colonists that went from Roanoke Island to Hatteras,” he said, and indicated that European remnants discovered in soils later than the 16th Century lead to the conclusion that the colonists’ culture was evident for several generations.

Dawson said CAS concludes the Croatoan became a mixed race family that never left Hatteras, but their features became progressively lighter and many of them had gray eyes, through inter-marriage and assimilation.

He said this confirms what English colonist John Lawson discovered when he made a trip from South Carolina to Hatteras in the early 1700s. There he saw some gray-eyed Indians in English clothing who said that their ancestors were white people who came from Sir Walter Raleigh’s ship, and “spoke out of a book.”