Offshore drilling: What’s all the noise about seismic surveying? 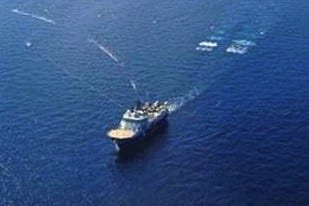 One of the flashpoints in the debate over offshore drilling for oil and natural gas centers on seismic surveying, an effective but controversial way to search for energy deposits.

Here’s a primer to help you understand what all the noise is about.

What is seismic surveying?

It’s an exploration method that uses pulses of sound projected into the earth’s crust. As the sound rebounds, the pulses are analyzed. From that data, images of the layers of sediment, rock and hydrocarbons up to 10,000 feet below the surface can be created.

The technology is used to search for hydrocarbons on land and in marine environments. It is also used by doctors when giving utrasound examinations to pregnant women.

Is this a new technique?

Not really. Land-based seismic surveying has been in use since the 1920s, although the early methods to create pulses of sound would be considered primitive by today’s standards: The survey team would set off dynamite at the bottom of a shaft they had drilled.

Marine seismic surveying was developed in the 1960s. Technology had advanced to the point that a method of sending a bubble of sound to the bottom of the ocean had been developed, and the returning sound waves could be interpreted by improving computer technology.

How does marine seismic surveying work? 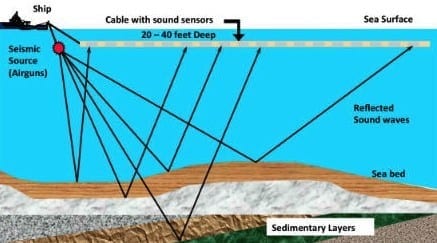 In a 3-D survey, a vessel tows an array of air guns and hydrophones. The guns emit pulses of ultrasonic sound waves that can penetrate up to 10,000 feet into the sea floor. The hyrdrophones detect the sound reflected off the seafloor. Computers then draw three-dimensional images of the geologic structure and provide clues to reserviors of oil or natural gas. (American Petroleum Institute)

An array of “air guns” is towed behind a ship and at timed intervals a pulse of sound is directed to the seabed. The term air gun may not be quite correct, though, according to Stanley Labak, an expert in marine acoustics with the Bureau of Ocean Energy Management, or BOEM. That’s the federal agency that regulates offshore energy exploration and production

“Air gun is the terminology in the industry since its inception . . . in the early ‘60s. But it’s not really a gun. It’s a chamber that has pressurized air in it and at a set time they release that air and it forms a bubble and it creates sound,” he said.

The pulses of sound penetrate the ground and as the echoes of the sound come back to the ship they are analyzed. From the data, the returning pulses create a detailed map of the earth beneath the ocean floor.

Why is it needed?

Currently, there is no alternative technology that maps the seabed and the resources that may there. To potential bidders planning to participate in BOEM’s planned sale of oil and natural gas leases off the N.C. coast, the information seismic surveying can provide is considered critical.

Why are some people opposed to it?

There’s no hard science to prove a link, but marine mammals have beached themselves in areas of seismic surveys. (Oceana)

Because all marine mammals and many other species of marine life use sound to communicate and navigate the oceans, many people are worried that the sound coming from the air guns will harm whales, dolphins, sea turtles and fish.

The pulse of sound is very loud, typically between 200 and 300 decibels.

To put that in perspective, normal conversation occurs at about 60 decibels; the noise of a passing truck is about 100 decibels; and the roar of a jet at takeoff is around 180 decibels.

Is there any evidence that any of these fears are real?

There are no peer-reviewed studies showing a definitive link between seismic surveying and injured or dead marine life. But there have been a considerable number of incidental events where seismic surveying has occurred that coincides with changes in behavior in marine life and large increases in dead animals.

Advocates for seismic surveying point out that the wave length of the sounds are well below thresholds of what almost all marine mammals can hear — higher frequencies will not penetrate beneath the seabed. They also argue that very little sound escapes from the air gun pulses, noting that the more focused the pulse is the more accurate and useful the rebounding echo will be.

Opponents say that laboratory tests on marine life subjected to similar sounds are adversely affected and considerable evidence points to injuries and death during seismic surveying.

A 1996 study in Norway showed a marked decrease in fish catches over a 2,000 square-mile area following seismic surveying. There are also, worldwide, well-documented beachings of whales and dolphins concurrent with survey activity.

Am I likely to hear the booms while walking the beach or fishing offshore?

Highly unlikely, although anything is possible. Because the seismic surveying that is being contemplated is so far offshore — a minimum of three miles for oil and gas — there is no possibility that the sound would travel back to the shore. If a seismic survey was done closer to shore and in shallower water, it is possible that the pulse could bounce off the bottom and be heard along the shoreline.

What’s being proposed for North Carolina?

The continental shelf off the North Carolina coast is clearly in the bullseye of where oil and gas are thought to exist.

There are two basic types of seismic surveying: two dimensional and three dimensional. A 2-D survey is an outline of an area where oil or gas is thought to exist. A 2-D survey is done by a ship with a single pulse source sailing a grid pattern. The survey information is less detailed but also takes less equipment and expertise to interpret.

The 3-D array, which provides more detailed information, requires multiple air guns on towlines behind the survey ship. There are permit requests for 2D- and 3D-surveys in N.C. waters.

Have state and federal permits been issued?

Getting a permit to engage in what’s called “geological and geophysical” surveying is detailed and legnthy. Because the areas under consideration are not within the three-mile jurisdiction of the state, no state permits are required.

However, the state has a federally approved coastal management program. That allows the state to review any action that requires federal permits to make sure it’s consistent with state laws and regulations. BOEM couldn’t immediately issue permits for seismic testing if state officials determined that it would violate the state program.

BOEM in February of 2014 issued a Record of Decision outlining what the government will be seeking in a G&G permit application. A detailed recital of mitigations and precautions, the document is 12 pages long.

No seismic surveying permits have been issued, although there are currently four requests. Petroleum Geo-Services has requested a 3-D permit. Spectrum GEO, WesternGeco and GX Technology have asked for 2-D permits.

The 3-D permit request is the only such request on the Eastern seaboard.

When will it start?

BOEM could move quickly after the public hearings, and seismic surveying could begin as early as this summer. But public concerns and problems with applications could slow the process down, or bring it to a halt.

Go to comments
This story is provided courtesy of Coastal Review Online, the coastal news and features service of the N.C. Coastal Federation. The Outer Banks Voice is partnering with Coastal Review Online to provide readers with more environmental and lifestyle stories of interest in our area. You can read other stories about the N.C. coast at www.nccoast.org.