Man from Missouri found dead on the beach off Corolla 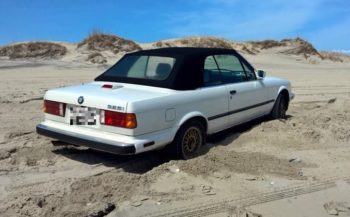 The man’s car was stuck on the beach off the end of the ramp north of Corolla. (Jeff Kelly)

A 57-year-old man from Missouri was pronounced dead Monday afternoon after a passer-by found him unresponsive on the beach north of Corolla.

The man was trying to drive a two-door convertible BMW with Missouri plates near the ramp north of the village, according to an eyewitness.

“My wife and I came across the man trying to dig his car out by hand around 11:30,” said Jeff Kelly, a Corolla resident. “We offered to help him or to call a tow company but he strongly refused.”

Voorhees said medics were unable to revive the man, and his name was not included in the statement.

“When we heard he had passed away we felt terrible and wondered if we could have done more. It is a terrible tragedy,” said Kelly.

The man likely died of natural causes and foul play is not suspected in the case, according to authorities.