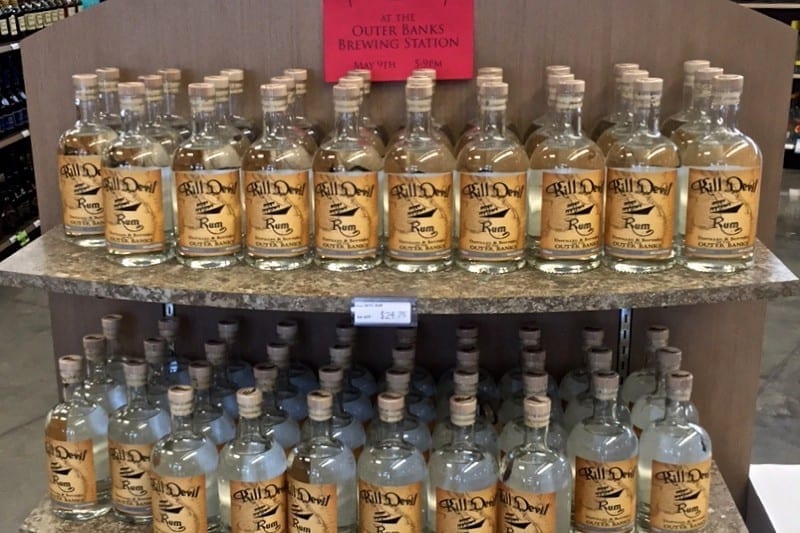 Social media demonstrated its marketing power once again when Outer Banks Distilling posted a small item Monday on its Facebook page that Batch 1 of its long-awaited Kill Devil Rum would be available in Dare County liquor stores starting today.

The distillery at 510 Budleigh Street in downtown Manteo has been featured on The Outer Banks Voice, and we’ve been eagerly awaiting the arrival of their first batch.

Outer Banks Distilling is the first distillery approved by the state ABC Board to operate in Dare County.

Kelly Bray, Scott Smith, Matt Newsome and Adam Ball were excited when we checked in with them mid-morning on their first sales day. They said they checked with the local ABC store and were told sales were brisk.

A trip to the Nags Head ABC store demonstrated just how brisk those sales have been. The manager there told us he went through 10 cases of Kill Devil Rum in just over an hour.

“Reinforcement” inventory from other stores arrived about 1:30 p.m. and sales continued to be brisk, with many people making spur-of-the-moment purchases upon seeing the display or overhearing chatter in the store.

The bottles are hand-numbered by batch and initialed by the employee who bottled it.

The retail price is $24, and according to the distillery, it is available today at Kitty Hawk and Nags Head, Duck on Wednesday and Buxton on Thursday. You may want to check stores earlier than the above dates as some stores may begin selling as soon as they accept delivery.

Under North Carolina law, the distillery cannot sell its product at the production site in Manteo, but you can stop by for a tour and a small sample. They have plenty of swag for sale, too.