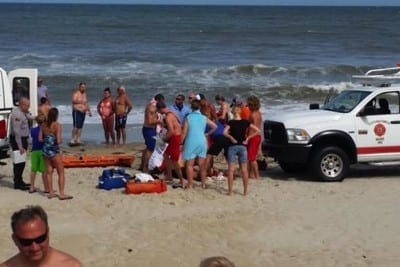 A 17 year old was on the beach with multiple bites. (David Marko, Twitter)

The second shark attack in two days on the Outer Banks was reported Saturday on Hatteras Island near the KOA Campground in Rodanthe.

A National Park Service statement said that an injured person was on the beach about 4 p.m. on Saturday, and Dare County EMS units from the Tri-Villages were responding.

Paramedics and NPS Rangers found a 17-year-old male with injuries from a shark. He was swimming with several others, but no one else was injured, the statement said.

The victim received injuries to his right calf, buttocks and both hands. He was treated, then taken by air ambulance to Norfolk for further care.

Mark McCarraher, co-owner of the Rodanthe Pier, said witnesses told him “it looked like a bull shark.”

On Friday, a 47-year old man was bitten by a shark in waters off of Avon. That victim was also transported by Dare Medflight to Norfolk Sentara Hospital.