High tech bellies up to the bar for a better cocktail 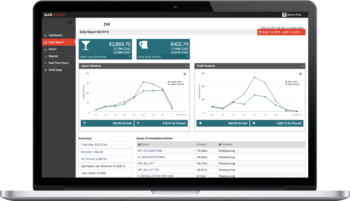 A new system to help restaurants and bars dispense liquor has been installed in a half dozen local establishments by a company with a local connection.

If you love properly mixed cocktails, read on.

If you believe a good bar is one that serves stiff drinks that violate the recipes that have made popular cocktails famous, move on.

If you are a bar owner or bartender who wants to improve the bottom line, serve quality drinks but have the discretion to deviate from standard recipes, you might consider this product.

Barvision’s CEO is Joe Nolan. His brother Mike is well known on the Outer Banks as a real estate salesperson and developer.

At the center of this new venture is a very inexpensive but high-tech pouring spout and an amazing software program on the backend that allows owners and bartenders to hone their craft, improve the bottom line and spot hot trends in new cocktails faster than was previously possible.

Anyone who truly loves the art of the cocktail is disappointed when a drink arrives at the table and tastes nothing like what you were expecting.

Even worse is when the same drink, over the course of a meal or night out, tastes different each time it arrives.

Cocktails have recipes for a reason, and in most cases, deviating from that formula alters the taste of the drink, usually for the worse.

In the past, technological innovations have attempted to solve the consistency problem and a related issue — over and under pouring — by restricting the amount of liquor dispensed.

Some bars used spouts that only allowed premeasured amounts with each pour.

Others went high tech with computerized tap systems that precisely dispensed each ingredient in a cocktail.

Bartenders, patrons and even media devoted to spirits despised such “innovations.”

For bartenders, the ability to change the pour is important.

Some patrons may prefer more or less of one ingredient in a cocktail and in the spirit of “the customer is always right,” mixologists wanted that flexibility.

For the best customers, a bartender even wants the ability to “comp” a drink.

Owners are interested in serving a consistent product, be it food or drink Any tool that helps bartenders learn to make a drink correctly is a win-win.

And of course, some bartenders are heavy handed with their pours, which hurts the bottom line in more ways than one.

Barvisions starts with a very cool spout, one that was made popular on the cable show “Bar Rescue.” Inside the spout is an RFID chip that is precisely programmed to the exact brand of liquor being dispensed.

For example, the spout isn’t just programmed for gin, or even Bombay Gin. It can be programmed to note the differences in pour rates between regular Bombay and Bombay Sapphire. 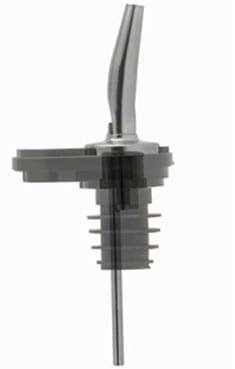 Using wi-fi, the spout then immediately transmits the amount of the pour to backend management software, including a time stamp of the pour. It is all saved in the “cloud”, so the chances of data loss are minimal.

Each spout is clearly labeled by brand so it is used in the correct bottle. According to Erin Nolan, marketing director for the company, the battery will last for 45,000 pours.

That can equate to four years of use and over a quarter million dollars of gross revenue for a piece of technology that costs the business about $3 a month per spout.

According to Nolan, early adopters of the device saw their bartenders making pours and then checking the results on the computer until they could get the pour right through repetition.

While some patrons may believe over pours are a good thing, most want two things from a night out — a correctly made cocktail and one that doesn’t end the night early from consuming too much alcohol.

Bartenders benefit because if over pouring results in people reaching their limits too early in the night, they quit buying drinks, which hurts gross revenues and for the barkeep — smaller tips from selling fewer drinks.

Nolan said the “savings” in yield per bottle were not as dramatic as one might expect. For a typical liquor bottle, the number of drinks poured before the contents are used up is in the range of 16 to 19. In theory, using precise recipes, that yield could rise to as high as 23-26 drinks per bottle.

But because the Barvision spout is free pouring, allowing bartenders discretion, the typical yield thus far has increased only about one to two drinks per bottle, which is still a significant boost to the bottom line.

Another advantage of the backend software is that owners can spot trends in popular new drinks and spirits faster. Younger drinkers use social media to spread the word about the latest “in” drinks according to Erin. Sometimes, owners are behind this curve.

With Barvision, an owner can spot in real time, say an increase in demand for drinks made with Fireball liquor while spotting a simultaneous decline in orders for Jagermeister.

Barvision aims to help ensure a cocktail tastes the way it’s supposed to taste, avoids excessive alcohol intake and allows the bar to sell more drinks over a reasonable period of time.