Third shark attack in a week, this time off Ocracoke Island 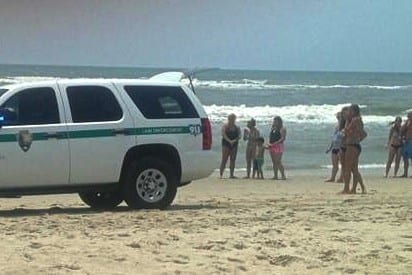 The incident was reported around 12:15 p.m. (@JasonGreer)

A 68-year-old man was bitten by a shark while swimming off the beach on Ocracoke Island around midday Wednesday, the third incident on the Outer Banks in less than a week and the seventh this season in North Carolina waters.

Lifeguards at the Ocracoke Day Use Area called Hyde County EMS at 12:10 p.m. to report that a swimmer had been injured, a Hyde County news release said.

The man, reportedly from Massachusetts, was swimming about 25-to-30 feet offshore, directly in front of the lifeguard stand when he encountered a 6 to 7 foot long shark, according to the statement. The shark pulled him under the water and the man sustained several bites to his rib cage, hip, lower leg and both hands.

He had been swimming in about waist-deep water with his adult son, according to National Park Service Outer Banks Group spokesperson Cyndy Holda.

An eyewitness on the beach, Sam Walker of Virginia Beach, said the man was conscious and talking to emergency workers. He was flown to Vidant Medical Center in Greenville for further medical treatment.

Hyde County EMS said they plan to have two ambulances with paramedic-level service available on Ocracoke, with a third on call for the Fourth of July weekend.

Last Friday, a 47-year old man was bitten by a shark in waters off of Avon. He was taken by Dare Medflight to Norfolk Sentara Hospital.

The next day, a 17-year old male was bitten several times by a shark at the beach near KOA campground in Rodanthe.

Prior to the three recent attacks, the last reported shark bites on the Outer Banks seashore was in 2012, when a woman was bitten on her leg while she was swimming in shallow water near the Avon Pier, according to the Island Free Press.

In 2011, a 6-year-old girl was airlifted to Pitt County Memorial Hospital in Greenville after she was bitten by a shark on an Ocracoke beach.

Rodanthe is 10 miles north of Avon, and Ocracoke is 40 miles south of Avon.

Several beachgoers posted photos on Twitter from the scene:

You thought I was kidding pic.twitter.com/nbPbrEgjuY — Jackson Fuqua (@jacksonfuqua) July 1, 2015