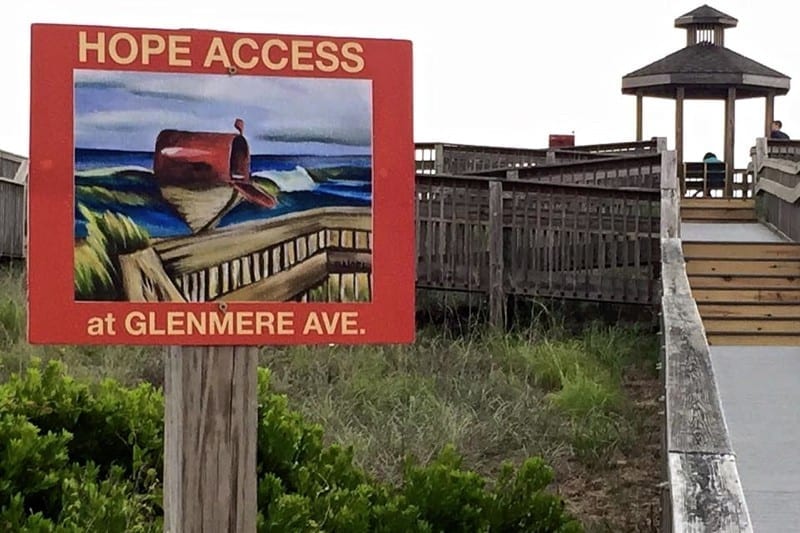 The painting at the access is by Barbara Noel. (Sue Goodrich)

It’s been a year since the little red mailbox was erected at the Glenmere Avenue beach access, but in 12 short months it has become a mecca of hope for many who pass by on their way to the sea.

Filled with a journal and pens, the weathered mailbox at the access’s gazebo has become a haven for those looking to receive or give messages of hope — or maybe a little bit of both.

Since its inception, visitors have filled four journals and more than 100 pages at this spot overlooking the Atlantic. It has become a favorite for family gatherings, quiet times by the ocean and even weddings.

For Sue Goodrich, the reason for the mailbox’s popularity is simple: “I really think that just like me, everyone needs a little help, no matter what phase of our lives we are in.”

The mailbox was her brainchild and was born during a time when she needed it most after her mother passed away.
Erected last July, it has survived salt spray, storms, cold winter days and lots of wear.

“So many people told me that if I put the mailbox up, to watch out for what people might do to it,” she said. “but that hasn’t happened. Everyone treats it with respect.”

The spot has always been a place for Goodrich to connect not only to herself and her thoughts, but also to the beauty of the sea. So it was just a natural fit when she was thinking about a place for this special mailbox.

Because of the positive response, the town has designated a physical address for the mailbox so that no matter where people were, they could always send a note of hope 365 days a year.

The message Goodrich hopes to send with the new address is this: “Even if you are not near, the Angels (the little red mailbox) do hear.”

Goodrich’s husband Eddie donated the gazebo and other improvements at the access in 2004. More improvements have been made at the site, including the installation of a bench.

Goodrich says she has a long list of entries that she holds close to her heart, and speaks affectionately of one man who visited the mailbox so regularly during a difficult period in his life that a special journal was made for him.

The dialogue between him and strangers in the journal for several months helped pull him out of despair, Goodrich said.

Benny Baldwin of Baldwin Video Productions is also creating a video about the mailbox for the town.

Goodrich says she is considering ways of compiling the entries and possibly having them on display at the Dare County Library in Kill Devil Hills.

While she’d love to see her idea spread, for right now she is happy that the Hope Access would always a place for those who visit to refuel, soak in nature and, of course, fill up on a little hope.