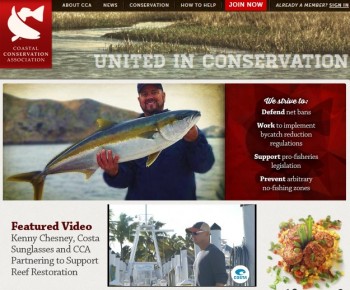 The CCA website touts Kenny Chesney as a spokesperson.

This is the third installment in a five-part series examining who is in control, who is being ignored and who has no voice at all in the management of the state’s multi-million dollar resource of finfish and shellfish that live in our coastal waters.

“The CCA has nothing to do with conservation unless you consider sport fishermen having all of a certain species allocated to themselves as conservation.”

Those are the words of author Robert Fritchey, who wrote Wetland Riders, the definitive book on the history of the Coastal Conservation Association.

The CCA traces its roots to Texas in 1977 and was originally founded by mostly wealthy anglers in Houston.

Fritchey describes the group as consisting entirely of “about twenty sportsmen, some wealthy, some not” who were convinced commercial fishing was killing sport fishing in Texas bays.

The group of men named their organization the Gulf Coast Conservation Association (GCCA). And it didn’t take long for the wealthier sport fishermen to take over.

Fritchey ticked off the names of those early leaders in the first chapter:

Fritchey is quick to draw a distinction between recreational fishermen and the wealthy, “trophy-seeking” sporting anglers who own expensive boats and are the financial backbone of the GCCA’s successor, the Coastal Conservation Association.

In our conversations with local commercial fishermen we found a similar sentiment. Most we spoke to did not blame recreational anglers for the issues the commercial industry faces. In fact, most enjoy fishing as their recreation.

Fritchey described in our interview how the GCCA is able to achieve so much regulatory success with such a small membership.

“They tap wealthy individuals as their key players in every state. These members have the money to donate to political campaigns,” Fritchey said.

“Through those donations, they are able to literally buy allies in state legislatures and in turn, have other allies appointed to regulatory and even bureaucratic departments that control and allocate marine fisheries in each state,” according to Fritchey.

Britt Shackleford talks about a 2012 Republican fundraiser held on the Outer Banks where a former board member of the North Carolina CCA and now member of the N.C. Marine Fisheries Commission was among those making significant contributions.

Indeed, as we mentioned in our first installment of this series, the North Carolina chapter claims less than 3,000 members out of close to half a million recreational fishing license holders in the state.

Nationally, the CCA claims about 100,000 members, while the National Marine Fisheries Service estimates over 12 million anglers drop a line each year nationally.

The group operates very much in secret, encouraging wealthy individuals to donate to candidates individually rather than through traceable contributions such as Political Action Committees.

A search of North Carolina’s campaign contribution files reveals the CCA has never held more than a few thousand dollars in its PAC, similar to the national CCA.

And yet, the North Carolina chapter has always maintained several lobbyists.

When the Democrats were in power, the CCA’s lobbyist was Bruce Thompson, of the law firm Parker and Poe.

According to the firm’s website, Thompson was named one of the top ten political influencers from North Carolina in 2013 by Campaigns & Elections, placing him on the publication’s “Influencers 500” list.

Thompson also served on the National Finance Committee for the Hillary Clinton for President Campaign and was an adviser to the former Secretary of State’s campaign during the North Carolina Primary.

But when the Republicans swept to power in Raleigh, the CCA switched to former North Carolina Speaker of the House Harold Brubaker as their man.

When Brubaker’s firm failed to get the infamous “Gamefish Bill” through in the 2012 General Assembly session, the CCA-NC dumped them.

Scott and Kirsten Laster of the Southern Strategy Group came on board to lobby during the 2015 session.

Scott Laster was the North Carolina Republican Party’s state House campaign director in 2010, the historic election that brought the GOP to power in both chambers of the General Assembly.

In 2012, he headed the North Carolina GOP election effort as executive director for the state party. His wife is an experienced lobbyist in Florida, where she worked that state’s legislature in Tallahassee.

This is how such a small group can leverage such power, apparently even grabbing advice from sitting legislators.

Big bank accounts, donations hidden from public view and cozy relationships with lawmakers and regulators are what drive the CCA.

It is the same strategy the CCA has successfully employed in Texas, Louisiana, Alabama, Mississippi, Florida and South Carolina to prevent commercial fishermen from harvesting certain species of fish while also restricting access to shrimp harvests in sounds, rivers and other estuaries, essentially forcing the shrimping industry in those states to harvesting in the open oceans along the East Coast.

Country music star Kenny Chesney is solidly in the corner of the CCA, and he is prominently featured on the national CCA website.

Costa Sunglasses, a favorite among recreational and commercial anglers, is also a major CCA sponsor. In fact, Costa is the official sponsor of the CCA national website. Add to the list Yeti and Igloo.

Those who consume the catch of local commercial fishermen, and at the same time buy these products or download Chesney’s music, are in essence supporting the direct opposition of commercial fishing and retail sales of locally caught seafood.

For the commercial side, one lone lobbyist, Jerry Schill, has neither the political connections with a major party, nor the budget that backs the CCA. Schill served as president of the North Carolina Fisheries Association for two decades, until 2005, when he left the state and returned to Pennsylvania.

He returned to the NCFA in 2014 as president and lobbyist, while also working with the Craven-Pamlico Christian Coalition and as well as heading the STAFF House Maternity Home.

While a hard worker, he is neither a former legislator, partisan fundraiser, nor a lead campaign strategist as the Democrats and Republicans who lobby for the CCA claim as their pedigree.

In part four, we will examine how the North Carolina Marine Fisheries Commission is set-up for failure when it comes to balancing the needs and wants of commercial and recreational fishing, and operates essentially in a cloud of mistrust by those on both sides.