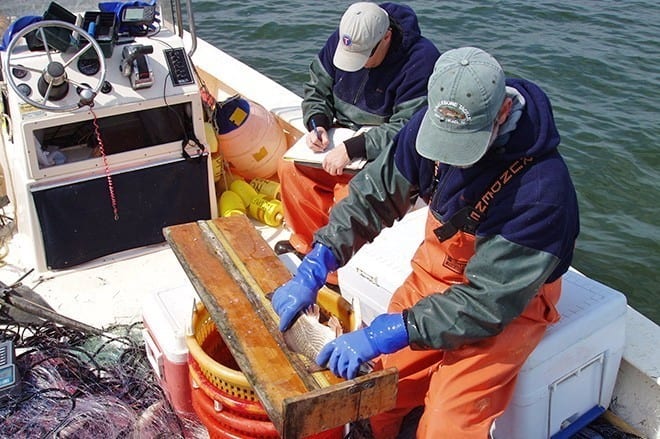 Studies can include tagging fish. (N.C. Division of Marine Fisheries)

Fifth in a series

We expect our science to be accurate and unaffected by politics, and as citizens, we expect political actors to treat science in the same manner.

Even Robert Fritchey, the author of Wetland Riders, a history of the Coastal Conservation Association, acknowledges that size limits, creel limits and other restrictions are necessary, and that “the science of estimating recreational discards and mortality is vastly improved.” Which would suggest that if interest groups are put aside, there is some hope science could be used in an unbiased manner to help manage fisheries.

This is the fifth installment in a series examining who is in control, who is being ignored and who has no voice at all in the management of the state’s multi-million-dollar resource of finfish and shellfish.

Yet a series of e-mails found their way into the public domain from a 2007 round-robin discussion among several N.C. Division of Marine Fisheries scientists trying to peg a mortality rate for speckled seatrout caught by recreational anglers. See video

It would take a few hundred words to demonstrate where science goes off the rails and how other factors, including interest group reactions, exert an influence on what is expected to be an unbiased, fact-driven process.

The mortality rate is important because it is applied to the estimated landings of recreationally caught species and used to assign “catch quotas” for recreational and commercial interests.

The group of six scientists struggled. They questioned even the scope of the studies. “I have a problem with the adjusted values. The handling effect is a real phenomenon with recreational fishing and is definitely a cause for release mortality . . . this study wasn’t designed to look at stress-related mortality . . . ” said one team member.

They also expressed concerns over small sample sizes, differing numbers based on seasonality and salinity of the water, and a wide variance in mortality rates produced by the studies — from a low of 7.3 percent to a high of 19.4 percent.

For those who skipped the video, one comment by DMF scientist Douglas Mumford angered commercial fishermen already suspicious of state and national studies that were reducing stock assessment numbers in several species and therefore, reducing commercial quotas.

“If we put the 19.4 percent on the table, (recreational) folks will flip out. They’ll tell you there is no way 1 out of 5 fish they release dies,” Mumford wrote.

In the end the group decided to go at the low end and chose a mortality rate of 9.8 percent, even though more than one scientist felt a range closer to 14.8 percent was more accurate.

In 2015, another clash between science and politics took place.

The state Division of Marine Fisheries had ordered a stock assessment of southern flounder, a species many believe is suffering from a decline in North Carolina.

Commercial fishermen dispute those claims, citing rising numbers in commercial landings with no concurrent loss of landings on the recreational side, even while previous restrictions on southern flounder have reduced the catch effort by 137 percent, according to Britton Shackleford, president of North Carolina Watermen United.

Even though the DMF staff recommended against releasing the study, which subsequently failed to pass a peer review, DMF director Dr. Louis Daniel, backed by recreational members of the Marine Fisheries Commission and at-large member Chuck Laughridge (a life member of the Coastal Conservation Association), as well as the CCA and another recreational interest group, the Recreational Fishing Alliance (RFA), declared their intention to move forward on reducing the commercial catch of southern flounder.

Once again, commercial fishermen, noting a study that failed to pass a scientific peer review, saw the “flawed study” still being used to reduce commercial operations, and adding further fuel to the fire regarding whether science or politics was dictating policy at the state level.

While a group of 13 state senators and representatives was able to persuade the MFC to delay taking action on imposing those restrictions until their September meeting, vote counters in Raleigh worry that inland Republicans will follow the CCA lead and allow the MFC to impose restrictions even though the science backing the decision has failed to pass academic muster.

Menhaden was once a major economic contributor to coastal North Carolina communities.

Severe restrictions on menhaden harvesting were imposed in North Carolina and other states based on a 2012 stock assessment from the Atlantic States Marine Fisheries Commission, which claimed the species had been severely overfished by the commercial industry.

National interest groups such as the Pew Charitable Trusts also released studies that came to similar conclusions, and as a result, Atlantic coastal states began banning certain gear (such as purse seines) and enacting other restrictions.

The North Carolina Marine Fisheries Commission was in the thick of things, enacting the purse seine ban on a 5-4 vote that saw the three recreational voters and both at-large members lined up against the three commercial members and the scientist, Allyn Powell.

The MFC should have listened to Powell, who was probably in the best position of any member to understand the ASMFC 2012 assessment. Almost from the day it was released, the assessment was met with criticism not only from the commercial industry, but marine scientists all along the Atlantic Coast as well, citing severe methodological flaws.

That criticism was not enough to overcome the political power exerted by PEW, the CCA and other interests groups, which the D.C.-based Menhaden Fisheries Commission saysresulted in significant economic hardships and job losses all along the eastern seaboard.

The upshot of the new study was one big “oops.”   The report concluded that not only were menhaden populations healthy, but they were not overfished and hadn’t been overfished since at least the 1990s — and perhaps even further back in time.

The Voice asked for audio recordings of the Dec. 12, 2013 Southern Regional Advisory Council meeting, where the status of shad and river herring stocks were discussed and subject to much public comment.

If one listens to the entire session, DMF scientists and spokespersons repeatedly cite the lack of definitive studies and hard data, and often use the world “extrapolation” to describe how they arrive at their estimates of fish stocks—all while the sentiment of the group veered toward more restrictions of commercial harvest.

As the battle goes on, one fact is beginning to emerge — science in this case is underfunded, imprecise, often flawed and influenced by fear of public perception.