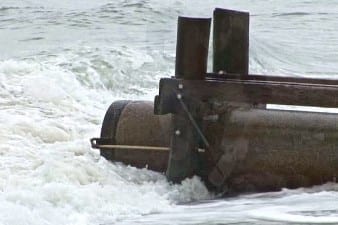 Stormwater, including runoff from N.C. 12, eventually makes its way to the outfalls. (UNC Coastal Studies Institute)

Septic tanks and bird droppings contribute to the stew of pollutants that pour into the ocean during and after storms on the Outer Banks, but measures to remediate the toxic flow could prove to be costly and politically difficult.

A draft report on a stormwater pilot project almost a decade in the making details episodic elevated levels of bacteria from fecal contamination at Nags Head and Kill Devil Hills beaches in the vicinity of nine ocean outfalls — large pipes maintained by the state Department of Transportation.

Stormwater, including runoff from N.C. 12, eventually makes its way to the outfalls. The study said that bacteria levels “consistently exceed water quality standards” after heavy rainfall and can be found as far away as 100 meters up and down the beach from the outfalls.

The N.C. Department of Environmental Quality paid for the Ocean Outfall Master Plan. Done in conjunction with the Coastal Studies Institute in Wanchese and the UNC Institute of Marine Sciences in Morehead City, the report is undergoing review. The Raleigh-based engineering firm Moffatt & Nichol submitted a draft to DEQ, which sent it back with comments. Others involved with the project have also commented.

Moffat & Nichol will incorporate the comments into the report, which will then be the subject of meetings along the Outer Banks. The final report is expected within a month or two, said Johnny Martin, coastal and hydraulic engineer at the engineering company.

It is, he noted, the first large-scale study of its kind in the state, although the large majority of state-maintained ocean outfalls are in Dare County.

“Once the final report is submitted, we’ll review it thoroughly and determine next steps,” said Tom Reeder, an assistant secretary at DEQ.

Stormwater runoff on the Outer Banks can contain high levels of bacteria from human and animal waste, but it also can carry pollutants from fertilizer, pesticides and petroleum products like oil and gas. Although sewage treatment systems are few on the Outer Banks, their discharges are not released through pipes going to ocean beaches.

The state has been sampling swimming waters at ocean and sound beaches since 1997, said J.D. Potts, manager of the Recreational Water Quality Program at the state Division of Marine Fisheries. About 10 years ago, permanent signs warning swimmers against possible pollution were posted at all the ocean outfalls on the Outer Banks.

Potts said that bacterial contamination is generally highest after rainfall. But since it’s harder to detect when water is flowing from the mostly submerged pipes on the Outer Banks, he said, the agency decided it was safer to have a permanent posting at the drainage pipes warning swimmers to stay 200 feet away. 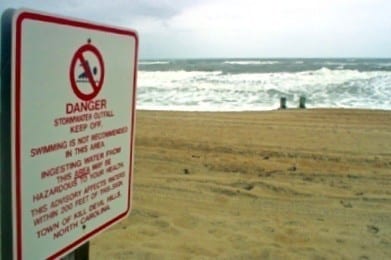 Permanent signs warning swimmers against possible pollution were posted about 10 years ago at ocean outfalls on the Outer Banks. (Coastal Studies Institute)

“We’re hoping people pay attention to the signs,” he said, “because we recognize at times there is a risk.”

Potts said the recreational waters are tested every Monday or Tuesday between April 1 and Oct. 1 at 240 sites throughout the state for excessive levels of enterococci, an indicator bacteria for pathogens found in the intestines of warm-blooded animals. When unsafe levels are found in samples, a swimming advisory will be issued and a sign will be posted until the levels fall. The bacteria increase the risk of diarrhea, vomiting and skin infections.

This year, there has been only one ocean swimming advisory issued briefly in Dare County, Potts said. The location, 100 feet north of Jennette’s Pier, was likely affected by pier fishing, not storm drainage, he said.

Still, state testing is not done directly from ditches where stormwater collects from the watersheds, Potts said. Samples are taken about 10 feet from the outfalls. Bacteria levels, he said, would be higher in the ditches.

“These data indicate that while beach closings are a result of sampling conducted at the outfalls, there are water quality issues throughout the town’s watersheds,” the report said. “These must be considered when selecting the appropriate measures to improve beach water quality.”

Much of the issue with bacteria in stormwater, according to the report, can be blamed not only on animal waste, but on the thousands of septic tanks that have been permitted, at least some of which may be in poor condition or in locations with high water tables.

Jack Flythe, Dare County’s environmental health supervisor, said about 45 to 60 septic permits are issued each month, based on conditions, among others, that require certain distances from other properties and the mean high water mark. Inspections take place before the permit is issued and after repairs. But otherwise, he said, it is up to the property owner to monitor the condition of the system.

The report lauded the town of Nags Head for its septic-tank initiative, which that involves voluntary citizen participation in inspection and maintenance. So far, Kill Devil Hills has not adopted a similar program. But Town Manager Debora Diaz said she has made the board of commissioners aware of the draft plan.

“When the final document is presented, the board will review and consider the recommendations for Kill Devil Hills,” Diaz wrote in an e-mail. “The board is interested in learning more about the Septic Health Initiative program that Nags Head began a number of years ago.”

It is clear that, in general, leaking septic tanks contribute loads of bacteria to stormwater, especially when it rains.

“At mean groundwater table levels, the portions of the study area where groundwater is in the range of 0-3 feet below the surface are largely concentrated in more developed areas, which is problematic because that is where the highest concentrations of on-site septic systems are located,” the report said.

“During times of high groundwater levels, groundwater passes up through the septic layer and can be seen at or above ground level as standing water throughout significant portions of the study area.

“Not only does this pose a health concern, but it also is an indication of a need for stormwater drainage,” the report continued. “This upward movement through the ‘septic layer’ and out to the surface may be an important dynamic in the high concentrations of fecal indicator bacteria in stormwater runoff events.”

That human waste is contributing to the problem was confirmed by tests at the Institute of Marine Sciences.

Contamination of beaches is typically short-lived, mostly because of ocean currents and dilution. But standing water — the impetus for the stormwater study in the first place — is another story.

“It goes way back to Sen. (Marc) Basnight in 2007, when we had a series of rainfall events,” said Nancy White, director of the Coastal Studies Institute in Wanchese. “People just went crazy and they inundated his office with telephone calls.”

Basnight, a native of Manteo, was at the time the leader of the state Senate.

Yards, parking lots and roads, especially on the northern Outer Banks, had been flooded by rain, and the increasingly wretched water not only didn’t drain away, it worsened with each storm. For weeks, people had to navigate through huge pond-sized puddles in their neighborhoods or try to pass through fetid rivers of floodwater on roadways.

It was determined that the only entity with responsibility for stormwater management in the county was NCDOT, which was responsible for maintenance of drainage outfalls.

Eventually, it was agreed that it was necessary to find out the volume and bacterial load of the runoff going through the outfalls.

Initially, CSI was involved in collecting data for the study and was supposed to analyze the results to determine ways to remediate the stormwater and its pathogen content. For two years starting in 2007, stormwater in outfalls was tested by the coastal scientists.

“There are 900,000 to 1 million gallons flowing through each pipe for every inch or two of rainfall,” White was quoted as saying in a 2009 article in The Virginian-Pilot. “There’s tens of thousands of cells of bacteria in every liter of water. The hard part is figuring out where the bacteria is coming from.”

But when about $12 million of the original $15 million appropriated for the stormwater project was diverted to cover construction costs for Jennette’s Pier, the role of CSI was diminished, White said, including work on the study. “I’m not directly involved,” she said this week.

As part of the state effort to reduce the stormwater bacteria, a pilot study of a “best management practice” was launched at the Conch Street outfall in Nags Head that involved installation of a filter system known as the AbTech Smart Sponge. Designed to capture the majority of the bacteria before the water reached the ocean, the system was enclosed within a concrete vault under the parking lot and directed water through two rows of 60 bacteria-attracting filter packs. Total costs for the device, including construction and a one-time replacement of filters was $1.3 million, Martin said.

The remainder of funds, about $1.7 million, was split between CSI, Moffit & Nichol and IMS for the outfall report, data collection and monitoring.

But the sponge technology, used successfully in Rhode Island, proved to be ineffective on the Outer Banks, partly because the water flows were much higher. “Higher tides impeded flows to be efficiently transmitted through the device,” Martin explained. “When tides were low, measurable treatment was achieved.”

According to the report, the filters were repeatedly clogged by sediment and at times ended up increasing the levels of bacteria discharging from the pipe compared with water going into the pipe. Possible remedies suggested in the report included use of better — and less expensive — filters and installing a pumping system to better control groundwater levels.

Each of the watersheds feeding into the outfalls in both towns were analyzed — size, drainage, permeable land, pathogen loading, number of septic tank repairs — and recommendations were made for managing the stormwater and controlling contamination from septic tanks and animal waste.

Various challenges are inherent in each option, whether high cost, inappropriate use with a high water table, unavailable land, intensive maintenance requirements or questionable effectiveness.

“One of the things that makes the Outer Banks so challenging is there’s not a lot of room between elevation of the beach road and the high tide levels,” Martin said. “Part of the issue is there is such a high water table.”

No matter what method, if any, is chosen to address stormwater and clean beaches on the Outer Banks, there is a looming issue not dealt with in the draft report that will only exacerbate the challenge: rising seas.

“If sea level does rise, then we would expect that the issue would be more problematic,” Martin said. “But I think any sort of effect from sea-level rise is a long way off.”