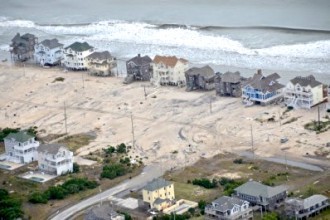 The result of ocean overwash on the the Outer Banks after Hurricane Sandy. (Coastal Review Online)

As national leaders and thousands of participants from around the globe gather in Paris for a conference on climate change, the town of Nags Head is preparing to host its own modest version of a summit on the issue.

The two-day workshop, facilitated by North Carolina Sea Grant, will involve the community in brainstorming about a future with higher seas. Coordinators will come armed with perceptions and concerns gleaned from interviews with a broad spectrum of residents and officials.

Whether it’s called spring tide, King tide, moon tide or just nuisance flooding, nearly everyone here has noticed that ocean and sound water is breaching dunes and bulkheads more frequently and to a greater degree.

Formally known as the Vulnerability, Consequences, and Adaptation Planning Scenarios, or VCAPS, the conference is at Town Hall on Dec. 7 from 5 p.m. to 8 p.m. and on Dec. 8 from 10 a.m. until 1 p.m. Local knowledge, organizers say, is critical to confronting climate change.

“It really, I think, is going to be a very useful conversation for the community to have,” Whitehead said. “It’s just a really flexible way for helping a community to deal with whatever nature throws at it.”

Nags Head is the third community in the state — behind Plymouth and Hyde County — to seek assistance from Sea Grant on addressing climate change, she said.

White said the town’s Board of Commissioners had decided at its last retreat to start exploring the potential impact of sea-level rise on Nags Head, bordered by the Atlantic Ocean and Pamlico Sound.

Coastal scientists consider North Carolina’s Outer Banks to be “extremely vulnerable” to the effects of rising seas, but strategies to adapt or diminish the impact have yet to be tackled by state policy makers. North Carolina is also one of the states opposing President Obama’s Clean Power Plan, which is aimed at helping the U.S. meet reductions in carbon pollution. Obama had promised the measure at the Paris conference, officially the 21st Conference of Parties (COP21) of the United Nations Framework Convention on Climate Change Conference.

“I’ve come here personally, as the leader of the world’s largest economy and the second-largest emitter,” the president said in Paris on Monday, “to say that the United States of America not only recognizes our role in creating this problem, we embrace our responsibility to do something about it.”

Negotiators in Paris are working to nail down an agreement among the nations to keep the rise of global temperature below 3.6 degrees Celsius, or about 6.5 degrees Fahrenheit, the invisible line dividing manageable climate change and severe to catastrophic consequences to the Earth and its oceans.

Virginia Burkett, the chief scientist for Climate and Land Use Change at the U.S. Geological Survey in Reston, Va., said that the Paris event is not a debate about the science behind climate change.

“It builds on and relies on the science,” she said. “But it is a policy-making event.”

Burkett said there have been four or five “meta-analyses” of the climate change science, including thousands of articles, books and peer-reviewed research journals. Of those, 97 to 98 percent of the literature agrees on the science that points to human-caused spikes in greenhouse gases and impacts that include warming oceans and temperatures.

“There are some outliers — and you would expect that,” she said. “But the consensus among scientists globally is very strong.”

According to the state’s sea-level report, the General Assembly does not intend to mandate sea-level policy or a definition of sea-level change for regulatory purposes.

“The current CRC chairman believes it should be addressed more at a local level, rather than coming from the state,” said Michele Walker, a CRC spokeswoman.

The report estimated that by 2045, seas on the Outer Banks could rise between 5.4 inches to 10.6 inches, with a considerably lower rate south of Cape Lookout. The CRC has been directed to study the “economic and environmental costs and benefits to the North Carolina coastal region” of developing sea level regulations and policies, the draft report said.

Walker said that the sea-level rise report is expected to be finished at the Feb. 1 CRC meeting, and delivered to the General Assembly by the end of March.

Greg “Rudi” Rudolph, a member of the science panel and the Shore Protection manager in Carteret County, said that 30-year plan, which will be updated every five years, is consistent with the typical time frames used in coastal planning.

“I thought the report provided a good tool for the local governments who want to take a hard number and work with it,” he said.

Rudolph said he favors local, rather than state, policy-making to address rising seas, especially when funding realities are considered. “Unfunded mandates and things like that are a big no-no,” he said. “Everybody hates unfunded mandates. I hate them, too.”

Bill Birkemeier, the science panel’s co-chair and a retired coastal scientist who lives on the Outer Banks, said that he has seen sea-level rise with his own eyes.

When he moved to Southern Shores in 1980, he didn’t have to worry about storm flooding in his garage. But with Hurricane Irene in 2011, he had to elevate his wife’s vehicle on 2 by 4s to keep the 11-inches of floodwater from the interior of the car.

Birkemeier said that the IPCC report is the best source of data to estimate sea-level rise. “Nothing gets in there without being vetted a million times,” he said.

Still, he said, the estimates based on new sea-level data are “changing by the day,” which tends to make estimation of rising seas a “moving target.”

“Thirty years is relatively easy because all the big stuff happens after 30 years,” Birkemeier said. “There’s more confidence in 30 years. So we need to do this every five years to see if new information moves the curve.”