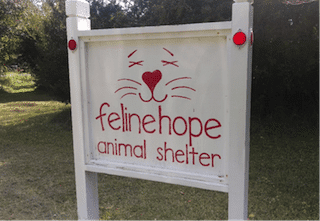 Fetch and Rescue is a series on area rescue centers for cats and dogs. This is our second installment.
By Jerrika L. Waller

Since 1995, the all-volunteer staff at Feline Hope has provided exactly its namesake for homeless cats around the Outer Banks.

Although versions of the non-profit have been operating for 23 years, Feline Hope cat rescue has been at its current facility in Kitty Hawk since 1998, offering a haven for cats and kittens who are six months and older as they await their new homes.

Among the approximately 25 shelter volunteers is Feline Hope’s executive director, Lita Katulski, who has been with the rescue for 17 years.

Upon arriving at the free-roaming shelter, one might be greeted by a resident looking for affection.

Scout, a gray-and-buff calico kitten who was staying at Feline Hope with her brother Carter, investigated newcomers in this manner, and confidently made the rounds to check in with both the humans and the cats in every part of the shelter.

Scout tried to acquaint herself with Pierre in particular, a recent owner-surrender with blue fur and big green eyes who was trying to figure out his new digs. 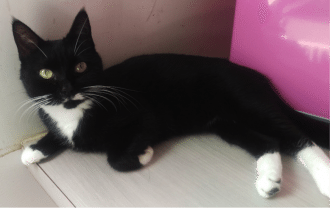 Shelby takes a break inside the shelter (Jerrika L. Waller)

Feline Hope tells adopters that if they cannot keep a cat, they can bring them back. The number-one priority is that the cats are safe and cared for.

The accommodations at Feline Hope are thoughtful and well-planned for the full-time residents.

The building has plenty of high-mounted shelves as vantage points, cubby beds and personal hideaways, a screened-in deck and toys to keep the cats entertained, happy and feeling safe.

Fergie, a striking “red patch tabby,” seemed to almost consciously use the wheel as a frame by positioning herself in the precise center of a shelf behind it. 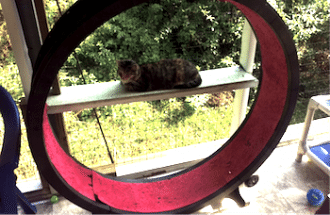 TNR involves trapping feral cats, neutering and vaccinating them, and then returning them to where they were found. “Our goal is to stop the overpopulation of animals,” Katulski said.

Many of the rescue’s kittens are acquired during TNR while they are young enough to tame easily.

Most of the rescue’s adoptions are arranged through their Facebook page, but some of the cats are also featured in adopt-a-thons at businesses like PetSmart and Holistic Pet Shop.

Feline Hope does not charge any adoption fees. Instead, they accept donations, and also offer clinic dates for a $35 spay/neuter/shots bundle. Katulski says, “We do very well at adoptions. Since I’ve been around, we’ve done almost 4,000 cats.”

Many adopters are from out of state, and much of the non-profit’s funding comes from them.

To adopt a cat from Feline Hope, visit their Facebook page, website , attend one of their Adopt-a-Thons, or visit the shelter at 843 Herbert Perry Rd, Kitty Hawk, NC 27949