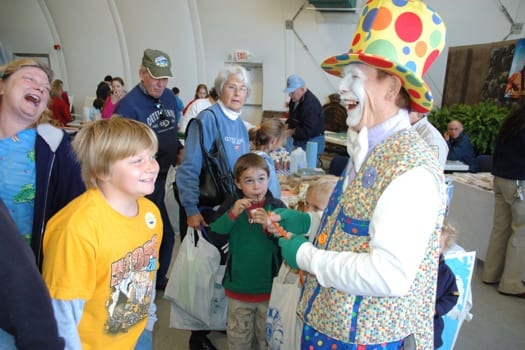 (Courtesy of Biff Jennings , Shooters on the Beach)

After nearly three decades of bringing joy to generations of children on the Outer Banks, “Magic Mike” Stoffel died this morning in his Colington Harbour home after battling liver cancer.

Stoffel was best known in the community for his clown performances during birthday parties, fund raisers and other special events.

Over the years, he brought smiles to the faces of thousands of local children with his entertaining magic tricks and balloon animal creations.

Magic Mike didn’t just touch the hearts of the young, but also the young at heart. And while he didn’t have any biological children, Stoffel had a few thousand Outer Banks youngsters who would come running when they saw him enter the room.

“He was a tremendous fellow,” said longtime friend Biff Jennings of Shooters on the Beach. “Even if you didn’t know him, you knew the crazy polka-dotted truck — him at the wheel with his white face and Mad Hatter top hat on his way to make kids happy somewhere. I don’t think there is anyone who has given that amount of happiness to so many children as Mike has.”

Stoffel’s pastor and friend, Tony Facenda of Still Waters Baptist Church in Nags Head, remembers him as a person who was a blessing to local children and who would always think about other people at every turn.

“He had such a kind heart and humor just flowed from him naturally,” said Facenda, who frequently performed humorous skits with Stoffel for his congregation.

“He may have had to put the costume on,” he said of his gig as Magic Mike, “but he didn’t have to put the character on. It was just who he was.”

Although most only knew him as Magic Mike, Stoffel was a jack-of-all trades, Facenda said. He was a disc-jockey, a plumber and handyman and even worked at a zoo for some time before moving to the Outer Banks. He was also a Vietnam veteran.

Local DJ and radio personality John Harper worked with Stoffel over the years on wedding gigs and other events. He was also a longtime friend.

“I always thought it was funny when I called to ask if he could help me with a job and he’d say, ‘I have to take my makeup off first,’ ” Harper said.

The first memory Jennings said he has of Stoffel is at his son’s birthday party 25 years ago.

“From under a handkerchief, he pulled out a bowl with a goldfish in it for my son to keep. I remember thinking, ‘Oh great, thanks a lot.’ We’ve been friends ever since he gave my son that stupid goldfish.”

Jennings isn’t the only one who remembers the handkerchief trick, one of many Stoffel had up his sleeve.

Growing up in Southern Shores, Ausband remembers riding his bike up to the Marketplace after school for snacks. He and his friends would sometimes bump into Magic Mike there.

“I remember asking him to show me a trick one day,” he said. “It was with a magnetic pen and I still remember that trick to this day.”

Along with making children smile, Stoffel loved live music and fishing, especially in the mountains of North Carolina. One of Jenning’s fondest memories of his friend was fishing with him on the Tuckaseegee River, which was filled with iron pyrite.

“I remember I was getting ready to cast, and I looked over and Mike was staring down into the river. He was looking around like he was about to rob a candy store and turned to me and said, ‘Biff, we are going to be rich.’ Only Magic Mike would do that,” Jennings said. “He was just so innocent.”

“I told him that he had made so many people happy, and it was time he got some of that love back,” he said. “And then there was that smile again.”