Hidden population of coyotes continues to grow in NENC 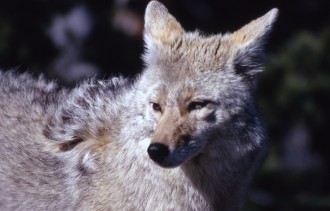 Wily, intelligent and adaptive, coyotes are in all 100 counties of North Carolina and they are here to stay.

“They are set up to use the habitat,” said Chris Kent, a biologist with the N.C. Wildlife Resources Commission whose district includes the state’s largest coastal cities.

Chris Turner, a commission biologist in the northeastern part of the state, agrees that coyotes are highly adaptable and can live in rural, suburban and even urban areas.

“Being omnivorous, they can utilize many food resources, ranging from small mammals to fruit/berries to agricultural crops to dog food and table scraps,” he explained in an e-mail.

Originally native to the grasslands and prairies west of the Mississippi River, coyotes first became permanent residents of the state’s mountains in the early 1980s. Within 30 years, they reached the Atlantic Ocean.

Although the evidence points to large populations in coastal North Carolina, they are rarely seen. “They are very wary of people and you just don’t see them very often,” Kent says.

And it may not be apparent to an untrained eye just what has been seen. At first glance, a coyote may look like a medium-sized dog or a small German shepherd, but with a more pointed muzzle and flatter forehead. They also tend to be thinner than domestic dogs, although in the winter they will look bigger because they are carrying a heavier fur coat.

Canis latrans is a remarkable species of canid. From its original habitat west, it has spread throughout North America and is found in every country of the continent.

“It’s generally understood that there was a canid top predator,” said Pete Benjamin, field supervisor for the U.S. Fish & Wildlife Service’s Raleigh office. “On the East Coast, cougars and the red wolf were eliminated, and coyotes have filled that niche.”

The service’s red wolf recovery program in Alligator River National Wildlife Refuge in Dare and Hyde counties has brought the eastern red wolf and coyote into direct contact. In the western United States where the larger grey wolf lives with coyotes, the coyote becomes prey.

The smaller red wolf, although larger than a coyote, seems more likely to avoid interaction for the most part. “Until mating season,” said Woody Webster, site manager for the state’s Buckridge Coastal Reserve in Columbia. The Buckridge Reserve borders the federal refuge.

Typical of the genus canis, coyotes can cross breed with dogs and wolves.

Fish and Wildlife biologists, worried about crossbreeding between coyotes and red wolves, came up with what they hope is an innovative approach. “The issue of hybridization is a concern, and we’re managing the interaction between the species,” Benjamin explained.

Like all canids, coyotes are territorial, and studies have shown that sterilized coyotes retain their territorial instinct.

No one is sure how many coyotes live along the coast. Scott Crocker has managed the state’s reserve sites along the northern coast for the past three years.

“I have seen evidence pretty much since I’ve been here,” he said. “Each year there’s maybe a half dozen that I actually see. I’ve definitely seen the evidence. Scat with fur in there and we have game trail cameras at both sites.”

Landowners often consider coyotes nuisances that can cause damage. “Unprotected poultry and livestock can . . . be harmed in some situations,” Turner wrote in his email. “Coyotes can also take small dogs that are left to range free or are left unattended.”

Because of the potential for damage to farm production and the designation as an invasive species, the N.C. Wildlife Resources Commission allows the hunting of coyotes at any time throughout the state. The exception is the five counties where red wolves live — Beaufort, Dare, Hyde, Tyrrell and Washington. In those counties a special permit is required.

Typically a coyote litter will be five to seven pups. If a coyote population in an area becomes too dense, the litter size drops. If the population is thinned either through disease or hunting, litter size increases — and may increase substantially — doubling in size over the average. Additionally, female coyotes will go into heat at a younger age.

This is a well-documented phenomena and one that the Wildlife Commission seems to address in its 2012 report on fox and coyote populations. “In all cases, the use of bounties has been an ineffective and inefficient tool for controlling coyote populations,” the study authors wrote.

Although there have been no systematic population studies of statewide or regional coyote population, that report offers indications of how widespread coyote populations are in North Carolina. A little more than 4,000 animals were killed by hunters in 2007-08, the report notes. Two years later, that number had more than doubled to more than 10,000.

Other animals have had to adapt to what is apparently a very healthy coyote population in eastern North Carolina, Turner wrote. For instance, the populations of those that compete with coyotes, like red foxes, have declined.

“Some small mammal species may now have another predator to deal with, resulting in increased mortality during the year,” Turner continued. “Increased mortality of some species, especially those small mammals that may destroy the nests of some ground-nesting birds can actually be beneficial for other native species.”