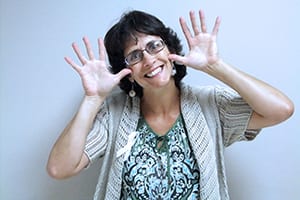 A positive personality is rarely a trait that people can overlook. Positive people are friendly and encouraging. They thrive in any situation.

Danielle James was one of those people.

“Everybody knew her,” said senior Morgan Gates, who knew James as a babysitter long before knowing her as a teacher. “They knew how good of a teacher she was and knew that it was what she was meant to do.”

On Feb. 8, James passed away after battling breast cancer for about a year. She was a graduate of College of The Albemarle and East Carolina University, a mother of four and a science teacher at First Flight since the 2005-06 school year.

James stepped away from teaching last year for cancer treatments that seemed to have been working: Not long ago, the 43 year old visited the school and told colleagues she was looking forward to returning in August.

“Mrs. James was a breath of fresh air,” 2009 graduate Chelsea MacCracken wrote in an e-mail to Nighthawk News. “She kept the glucose drawer always stocked, and had a way with teaching that made even the most difficult student love biology.”

James was First Flight’s Teacher of the Year in 2010-11 and her teaching methods were widely discussed throughout the school by students who loved her class.

“I always remember her in her apple costume and her purple wig teaching us about osmosis and homeostasis,” senior Samantha Xiques wrote in another e-mailed tribute.

Even on bad days, James was happy to help.

A quick look at her Haiku page reveals some of James’ encouraging tendencies. There are posts footmarked with the words “savor life and be a lifesaver” in rainbow type. The words “be a lifesaver” appeared on the marquee outside First Flight, and the school’s Friends of Rachel Club passed out notes with that phrase and Life Savers candy.

Elsewhere on Haiku are pictures of her students on field trips, her family and even a photo of James on a high ropes course with the caption, “Challenge yourself, I did!” Sometimes, however, her role as a teacher extended beyond just being a good educator to that of a good friend.

“I was in her sophomore biology class two years ago and on my birthday we went to the butterfly garden,” senior Chloe Williams said. “She knew that my birthday was coming up so she had both biology classes sing me happy birthday, and she clogged.”

James didn’t befriend just her students but also her fellow teachers, always trying to be a positive force in the lives of others.

“Two years ago, before she was sick, my daughter and I were back-to-school shopping and some people were yelling to each other across the aisles,” Duke said. “It was something like, ‘Who do you have for science this year because Susie Q hates science’ or something like that, and the person responded, ‘Danielle James.’

“As soon as they said ‘Danielle James,’ somebody came way out from the shampoo aisle and before you knew it there were like 10 people in the makeup aisle saying things like, ‘Oh, she is such a great teacher, your kid is going to love it.’ I kept that story in the back of my mind and figured if she was ever having a bad day I could pull that out and tell her. I did get that opportunity.”

Through both visible reminders of James’ impact in the community and the legacy of love felt by her family, friends and former students, Danielle James’ positive spirit will never be forgotten.

“I will never forget the first time she said to a class of students, ‘I am living my dream,’ ” Colby Voight, a former First Flight teacher who currently works at Nags Head Elementary, wrote in another e-mailed tribute.

“It was so genuine, so heartfelt, that it inspired them and me to find the same for ourselves. She was fierce in her acceptance and love as a friend, and every cell in my body will miss her, but her voice and spirit will live in my heart.”