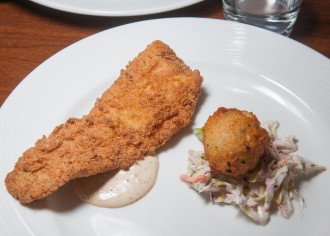 The Voice’s own gustatorily intrepid food writers, Rosie Hawthorne and I, were invited to join about 50 other Outer Bankers to dine on cape shark and report our findings as part of the North Carolina Sea Grant Shark Sensory Evaluation.

You may call us human guinea pigs, but I prefer Sea Grant’s term, human sensory evaluators. The purpose of the event is to use our feedback on the variety of preparations of cape shark (a.k.a. dogfish) to explore the viability of a North Carolina market opportunity for this native fish.

The cape shark are caught but not consumed here.  The Sea Grant project’s goal is to develop a market closer to its fishery, thereby increasing economic benefits to local fishermen and local wholesale dealers all the while continuing to manage the fishery’s sustainability.

An e-mail from Sara E. Mirabilio, fisheries specialist for the North Carolina Sea Grant Extension Program, helped explain the plan. Mirabilio wrote, “First, the project is not about harvesting more fish, but rather, about getting more value for the fish that are harvested.”

She further explained that North Carolina fishermen sell whole cape sharks to dealers in Wanchese for a mere 10 cents per pound. That dealer then must truck 100 percent of that catch up to processors in New Bedford, Mass. for only 22 cents per pound. All this cape shark meat is sold overseas by the processors for $3 per pound.

Local processing would then, in theory, keep more of the value of this trade in the community, bringing more revenue to fishermen, fish-cutters and fish houses. 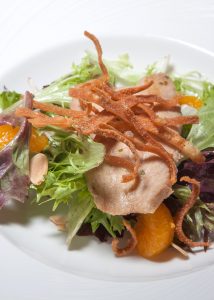 The salad course with soy-infused, steamed cape shark on a bed of greens.

“If there were in-state demand for the product, it would give reason for in-state processing capability to arise, and thereby, increase the revenue generated locally off the same caught fish.”

For this project, Mirabilio tasked Etheridge Seafood to cut cape shark for their first time ever. Sea Grant purchased the filets at $3 per pound.

The Feb. 2 event at Café Lachine in Nags Head was the first of three local sessions. It was followed up at the same location on Feb. 23 and the final session on March 15. Taste-testers are asked to attend the full series.

Three dishes were prepared: an appetizer, a salad and an entrée. They were graded by participants on flavor, appearance, aroma and texture on a numeric scale with 1 being the worst and 7 the best.

Mirabilio was our emcee.  She began with an explanation of the consumer taste-testing process. Demographic forms were passed around that not only asked basic information, but specific seafood consumption and dining activity questions. We were instructed to follow a protocol of having only room temperature water and salt-free crackers along with our meal, much to our chagrin. Since this was in the name of science, we summoned the strength to endure

Back when I lived on the Texas gulf coast, the fish tacos we were familiar with were made using black tip shark. I found it to be similar to Mahi Mahi in texture and even milder in taste. But this cape shark species was new to me, yet any trepidation was allayed by the knowledge that the cooking would be in the hands of a chef Justin Lachine.

The first dish was shark in phyllo. The fish was shaped into a plank, a bit less in size than a half deck of playing cards. Wrapped in phyllo, it was baked, then perched on a tidy bunch of carrots and green bean nubs and surrounded by a well-seasoned carrot and ginger puree. I found this dish an adequate, low-key appetizer. 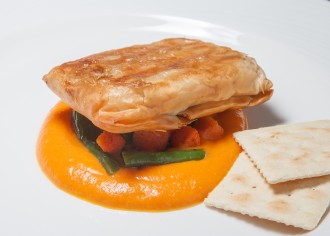 The appetizer was based on phyllo wrapped, baked shark on vegetables and carrot and ginger puree.

Next up was the salad course. A small, maybe 3-ounce, steamed cape shark filet atop delicate greens, topped with fried julienned wonton skin and accompanied by slices of nectarine and slivered almonds. The dish was pretty, and soy added a flavor punch to the fish. The casual talk around our table was the plating could be helped with a bit more of the vinaigrette.

The final plate proved to be the crowd favorite; fairly straightforward fried fish with hush puppy and coleslaw with remoulade. The sauce and slaw lent a sharp counterpoint and the batter added crispy texture to the mild, flaky filet.

This was an interested evening. Learning more about the foods we eat, their origins and how they fit into local and global economies is an interesting and worthy endeavor. That a new market may be developed is even more intriguing.

The taster’s feedback will be used in Sea Grant’s evaluation of a possible new local market for the cape shark. It’s possible that in the near future, cape shark could start to appear on local menus. All that will have to be determined, and these taste-test sessions may provide needed information in that regard.

The next session is slated to include a presentation on the population biology of the spiny dogfish, make that cape shark, and more details on the Sea Grant’s project.