The sudden resignation of Louis Daniel III as director of the North Carolina Division of Marine Fisheries last week caught supporters, critics, employees and members of the N.C. Marine Fisheries Commission by surprise.

Among the reasons that have been speculated on include mounting pressure of the job Daniel had held since 2005, potential fallout from a state audit of the commission’s activities, as well as political pressure from members of the General Assembly.

More puzzling is the lack of even an official statement from the state that Daniel had stepped aside.

The move was disclosed only in an e-mail from John Evans, chief deputy secretary of the N.C. Department of Environmental Quality, alerting department staff of the resignation and appointment of Jerry Kelley, head of the N.C. Marine Patrol, as acting director.

Elected officials, including Gov. Pat McCrory, who will appoint Daniel’s successor, have also yet to comment publicly on the resignation.

Concerns have also been raised on both sides as to who will be the next director. While some said “good riddance,” others were more diplomatic.

Even more were concerned that the new head of the division may actually be a worse alternative for their side of the fisheries industry.

It was no secret that both commercial and recreational fishing groups had expressed dissatisfaction with Daniel’s administration over the course of his tenure.

But even those who tangled with him at times were taken aback by his sudden decision late Monday afternoon. 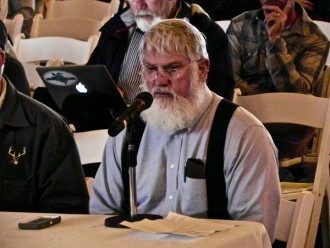 “This news came as a bit of a shock when I heard it at 4:00 (that afternoon),” said Jerry Schill, president of the North Carolina Fisheries Association, an organization that supports commercial fishermen.

“Even though everyone involved with fisheries management knows that the director’s position can be a very difficult one, Louis was in that position for over nine years and is second only to Pres Pate in longevity.”

While they were very far from agreeing on every topic, Schill said Daniel kept communication open and respectful, and was grateful that Daniel was always available to talk.

Commission member Janet Rose of Currituck also expressed surprise at Daniel’s sudden departure and said she was also unsure what may have led to it.

During the past two years, it became well known that the commercial fishing industry had lost virtually all confidence in Daniel as well as the Marine Fisheries Commission, a body that regulates and sets quotas for the state’s fisheries and by statute is supposed to balance commercial and recreational interests.

Concerns raised in an Outer Banks Voice article on Sept. 21, 2015 had reached high ranking members at the state capitol, according to numerous sources, and those concerns may hint at how Daniel’s standing deteriorated so fast.

In that article, a red flag was raised concerning the actions of the recreational and at-large members of the Marine Fisheries Commission, particularly at-large member Chuck Laughridge.

Laughridge was a former fundraiser and board member of the Coastal Conservation Association, the nation’s most powerful interest group professing to represent recreational anglers.

E-mails from Laughridge to the commission’s attorney at the time, Jennie Hauser, sought clarification of what constituted a violation of the state’s open meeting laws.

While some may presume Laughridge was exercising due diligence, others saw this question as a legal way for certain members to carry on discussions of public business outside the spotlight of the state’s open meetings law.

In an earlier interview, state Sen. Bill Cook, R-Beaufort, said the commercial industry had totally lost faith in the ability of the commission to fairly regulate both the commercial and recreational sides, and that something needed to be done to restore faith and fairness.

Local and state capitol sources said the issues raised by Steinburg and Cook triggered the Office of State Auditor Beth Wood to initiate a probe of activities of both the division and commission. The findings of that audit were released on Feb. 16.

Among the questions that were posed to the Auditor’s Office included accusations that there had been violations of open meetings laws, and that Daniel would send e-mails to only select members of the commission.

Southern flounder was the primary issue discussed in the e-mail, and three of the four were originated by at-large or recreational members. A majority of the commission members and Daniel were copied in the communications.

“Personally, I think it is not appropriate to approve any of these extensions or new pound net permits or additional pounds to existing permits . . . until the amendment process is completed,” said at-large member Anna Beckwith in an e-mail dated July 17.

“There is no logical reason why we should allow additional gear in the water that targets flounder,” Beckwith added.

In each instance, the commission’s legal counsel, Phillip Reynolds, stopped the e-mail communication and reminded members about open meeting laws, according to the audit.

Daniel was copied on the e-mail, and nowhere does it appear he tried to stop the discussion, respond to the obvious open meetings law violations or point out that one member at the time, Mikey Daniels of Dare County, was left out of the communications.

Not only do the communications appear to be violations of the open meetings law, but they demonstrated that certain members of the commission were discussing their opinions about the issue of emergency limits on flounder catches prior to one of the most controversial decisions the commission would undertake last year.

In spite of complaints from commission members who did not take part in the online discussions, elected officials, media reports and repeated warnings from the commission’s legal counsel, the group that continued to discuss state business in this matter appeared to have total disregard for the policies regarding communication by elected and appointed regulatory bodies.

The day before the audit findings were released, Reynolds again had to remind the commission about potentially violating the law. 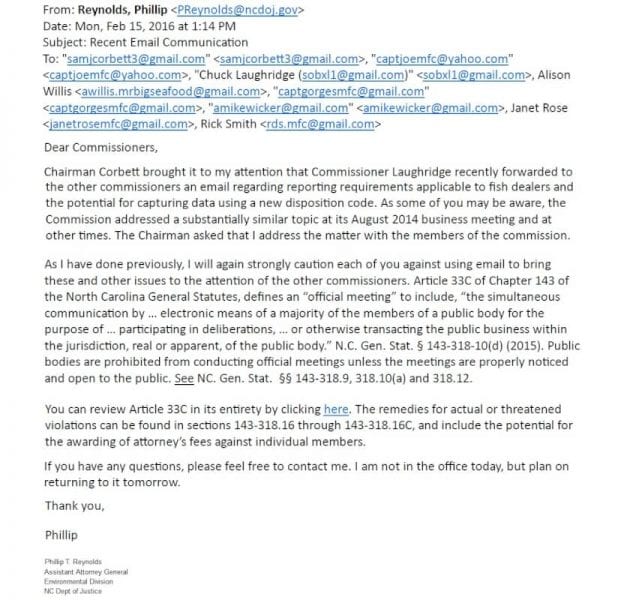 The real reason for Daniel’s resignation may never be known.

One source said he was reassigned to another position in state government that was not involved in fisheries regulation.

Another indicated he was moved to the Shellfish Sanitation Section inside the Division of Marine Fisheries, which is responsible for monitoring and classifying coastal waters’ suitability for shellfish harvesting for human consumption.

Even among his critics, he was described as friendly and affable.

One former employee said that, to a fault, he wanted to be liked by all sides while he tried to balance the needs of commercial and recreational interests.

Perhaps that was his Achilles’s heel. When serving as a referee between two strong-willed groups, staking out a position can risk angering one or both sides of the interest groups under your jurisdiction.