‘A historic day’: Celebrating the culmination of a 20-year effort 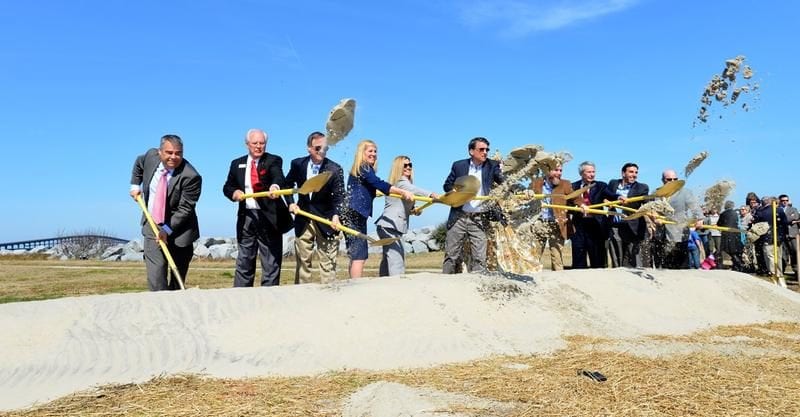 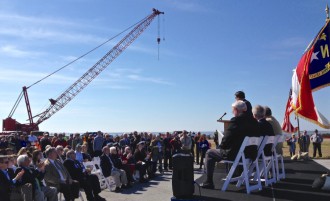 With a construction crane towering nearby and dump trucks rumbling past on N.C. 12, public officials, business people and local citizens gathered Tuesday for a celebration more than 20 years in the making.

The ceremonial groundbreaking at the foot of the old Bonner Bridge signified the transition of the fight for its replacement from a courtroom stalemate to what speakers called a personal triumph for those who depend on a safe route over Oregon Inlet.

District 1 Board of Transportation representative Malcolm Fearing, recalling that his father attended the ribbon-cutting for the original bridge more than 50 years ago, proclaimed it a “historic day.”

“This is personal for people’s livelihood not just here on the Outer Banks but throughout North Carolina,” said Gov. Pat McCrory, one of five speakers at the ceremony.

Pointing to a character from The Lost Colony dressed in 16th-century regalia, McCrory declared to cheers and applause:

“We even have Queen Elizabeth, who’s been waiting a long time for this to happen!”

Other speakers credited McCrory with breaking the deadlock in litigation filed by environmental groups that had tied the project up for years. A compromise calls for construction of the new Bonner Bridge in exchange for a more durable and environmentally friendly plan for N.C. 12 to the south.

Overhead, a plane pulled a banner admonishing McCrory’s support for offshore drilling. Some have noted a perceived contradiction between celebrating a potential boost for tourism and the possible economic damage from an oil spill. “Oil drilling is bad for business. Nottheanswer.org,” the banner read.

The old bridge, stretching in the background as McCrory spoke from a stage on the southern side of Oregon Inlet, is considered structurally deficient and more than 20 years past its expected lifespan.

Millions have been spent on keeping it in service in the face of rusting framework, crumbling concrete and erosion that has left pilings dangling above the ocean floor.

Near the site of the ceremony, erosion control fencing, barrels and safety barriers were clear evidence that prep work on the new span is already under way. It will cost $246 million under a design-build contract with PCL Constructors Inc. and HDR Engineering Inc. of the Carolinas.

State Secretary of Transportation Nick Tennyson said the new bridge is designed to last a century and should open in three years. It includes the first-time use of stainless reinforcing steel, deeper pilings and 8-foot-wide shoulders.

Replacing the one existing navigation span over a channel needing constant dredging will be seven farther south in deeper waters.

The bridge is the only land link to and from Hatteras Island. It was closed several days last year as the Department of Transportation addressed safety problems.

“With the new Bonner Bridge,” said Bob Woodard, chairman of the Dare County Board of Commissioners, “the people of Hatteras Island will have peace of mind.”