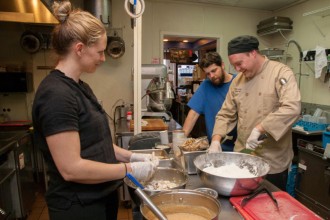 In the Café Lachine kitchen, the dishes are prepared by (from left) Johanna Lachine, Justin Lachine and Eric Whidbee.

Story and photos by Jim Trotman

The spiny dogfish, also called the mud shark, spurdog or cape shark, is known to marine biologists as Squalus Acanthias, but even they call them fish.

Like members of the larger shark family, they have a cartilaginous skeleton. A major distinguishing feature of the spiny dogfish is the presence of two sharp, dagger-like spines in front of its two dorsal fins. The spiny dogfish uses them as a defense against predators.

A row of white dots streams along its sides and its eyes are very large for the size of its head. Unlike the sharks we know from the movies, the teeth are more like bars of bits from a chain saw. With these, they are better equipped to crush and grind mollusks for food. Males mature at 11 years and females mature in 18 to 21 years.

Life cycle, mating and habitat and more facts were the basis for the pre-tasting presentation by N.C. Sea Grant Fisheries Specialist Sara E. Mirabilio, at the second of three Cape Shark Sensory Sessions. The local tasting site for this area is Café Lachine in Nags Head. She also reviewed our tasting and pricing scores from the first session. 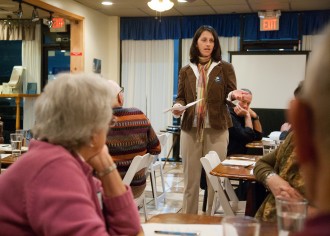 In her previous presentation, Mirabilio had detailed the current and potential economic aspects and management of this locally caught fish.

Currently all commercially caught cape shark are exported. If you have visited a chip shop in Jolly Old England chances are the fish you had with your chips was a cape shark, but they might have called it “rock salmon.” In Belgium, if you ordered “sea eel”, you were in fact munching on good old spiny dogfish.

The thrust of this Sea Grant project is to explore the possibilities of keeping and using that catch, or part of it, here where it is caught.

After the Power Point show, the tasters were treated to another round of appetizers and salad and entrée courses. Following the familiar protocols, the only beverage allowed was room temperature water and only salt-less crackers between courses to cleanse the palate.

The dish was a New England cape shark chowder and it was a crowd pleaser.

The cape shark’s semi-firm texture and mild taste married perfectly with the creamy broth, local Andouille sausage, potato and corn, with a slight drizzle of an herb oil to finish. Velvety and rich, the chowder was especially welcomed on a cold February evening. 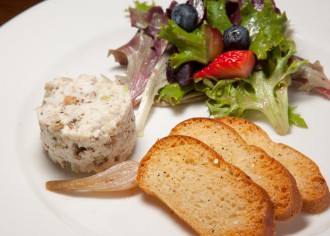 Next up was the smoked cape shark salad cold plate. This dish likewise was well received, with nearby tables discussing this dish as being perfect for cocktail parties.

The cape shark was smoked on the premises of Café Lachine, flaked in with other aromatic components such as celery and ramps and forced into a cylinder shape. This was served with a pickled ramp, crostini and a fruit and greens salad.

The composition of cape shark lends itself quite well to smoking. 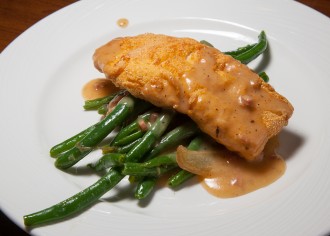 And lastly, another fried preparation for the entrée arrived. This time, the coating was cornmeal instead of flour as the first session had been.

Though quite attractively plated atop a heap of perfectly cooked green beans and dressed in a tasso gravy with bacon and caramelized onion, the crust tended to crack and crumble away unlike the first tasting, which used a flour batter. But that is what these tastings are for, to discover what works.

The third and final Cape Shark Sensory Session took place March 15th. More on that next.