Cause of Whipping Creek fire determined as U.S. 264 reopens

2,200 gallons of water are dropped during each run of the “Super Scoopers”. (Cory Waters/USFWS) 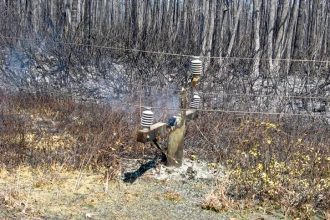 State investigators have determined that a grass mowing operation along the shoulder of U.S. 264 last week accidentally sparked the Whipping Creek wildfire that has burned more than 13,000 acres on the Dare/Hyde mainland.

The remote two-lane highway has reopened to through traffic between Stumpy Point and Englehard, as smoke has thinned out in the immediate area around Long Shoal River, where the fire originated last Monday afternoon.

The N.C. Forest Service said right-of-way maintenance along the shoulder of U.S. 264 ignited the fire that has spread onto private and public lands, including the Alligator River National Wildlife Refuge and the military-owned Dare Bombing Range, but is not a threat to any homes.

“Mowing or bush-hogging of fine flashy fuels such as dead grass or leaves can be a source of ignition when stones or other metal debris is struck by the mowing blades,” said Bonnie Strawser, visitor services director for the Alligator River National Wildlife Refuge, in a statement from the joint incident command center for the fire.

A spokesperson for the N.C. Department of Transportation, which contracts with private companies to handle right-of-way mowing operations, said last Tuesday that local NCDOT personnel were unaware of a possible connection.

A follow up e-mail with NCDOT after the cause was announced had not been answered as of Sunday night.

Efforts to battle the wildfire received some help from the rainfall Friday and Saturday, but forecasts for the early part of the week suggest the fire will continue to grow. 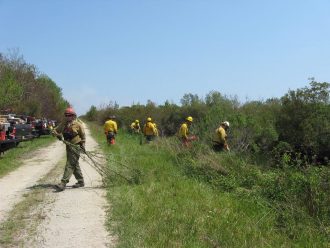 A pair of airplanes from Minnesota arrived in the area Saturday and started dropping water on the fire zone Sunday. The CL-415s scooped up water from the Alligator River and delivered it to the fire every six minutes, Strawser said.

Because some of the water drops were taking place near U.S. 264, the road was closed to through traffic until around dusk Sunday.

On Monday, the fire was covering 15,449 acres and was 54 percent contained, and 153 firefighters and fire managers are assigned, primarily from the North Carolina Forest Service and the U.S. Fish and Wildlife Service.

Just over an inch of rainfall Friday and early Saturday helped decrease the smoke and fire activity responsible for near zero visibility along U.S 264.

In days to come, increased fire or smoke behavior along the highway may cause fire officials and local law enforcement to close the highway at any time.

Fire managers recommend that drivers check the NCDOT website before traveling, and be aware that firefighters and their equipment will be working along the highway and adjust their speed accordingly.

“Drivers should also be looking ahead for any utility poles or power lines that may have fallen on the highway,” Strawser said. “Remember to treat all downed power lines as ‘live wires’ and keep a safe distance.”

Although the fire footprint has received rain, fuels can dry quickly, according to Strawser. 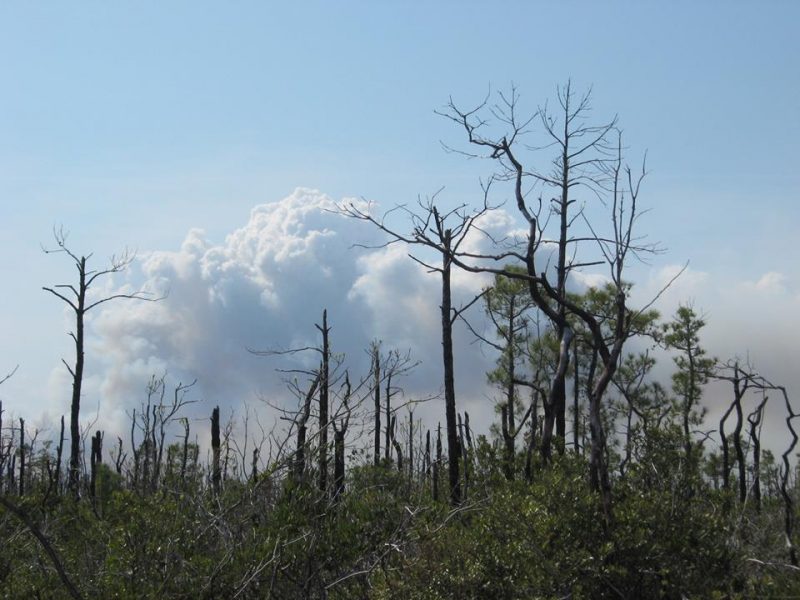 Smoke from the Whipping Creek Fire billows west of the site of the 45,000 acre Pains Bay Fire, which smoldered from May until September 2011 before it was finally extinguished by Hurricane Irene. (USFWS)

“The recent decrease in visible fire and smoke is evident on the fire perimeter,” Strawser said. “However, changes in the weather can cause fire activity to increase.”

Rising temperatures, decreased humidity and changes in wind direction and speed are forecast for the coming week, with the only mention of rain over the fire zone for Tuesday night, Thursday night and during the day Friday.

On Saturday, the strategy was to continue to hold the northern perimeter from advancing north of Jackson and Maple Roads, and east of U.S. 264 from the Pains Bay area to the north toward Stumpy Point.

The fire is still not a threat to any residences nearby and has been concentrated mostly on some private land, state-owned game land, the wildlife refuge and the military-owned Dare Bombing Range.

Strawser said Sunday morning the estimated cost of suppression efforts to date is $505,242.00.