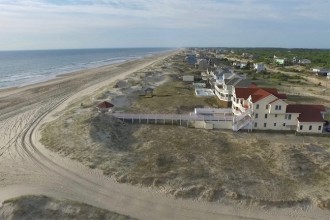 Property owners on the northern Outer Banks and Currituck County have been locked in a dispute over commercial development for decades. (Coastal Review Online)

A Superior Court judge issued a default judgment of more than $39.1 million against Currituck County Monday, the latest development in a battle between the county and Swan Beach property owners who want to develop their land for commercial uses.

“We’re pleased with the judge’s decision,” said Mitch Armbruster, attorney for the plaintiffs. “The plaintiffs have been hoping to develop their property for more than 10 years, and we’re hoping they can move forward and do that.”

However, county officials say it’s not over yet. The county is preparing to file a motion to have the case reviewed by the Superior Court. Currituck County may also file an appeal with the North Carolina Court of Appeals once the decision is deemed final, according to a press release issued by the county Monday afternoon.

Swan Beach LLC and other plaintiffs allege that the county has discriminated against them by not allowing them to commercially develop property they own in the four-wheel-drive area of Currituck’s northern Outer Banks.

The plaintiffs assert that they should be allowed to develop the land based on the way it was zoned when they purchased it, and they would not have spent money preparing the land for development if they had known it would not be allowed.

The county passed its Unified Development Ordinance in 1989, and at some point, the property was zoned as RO2, or essentially residential, with a few allowed business uses, such as marinas and campgrounds.

Since that time, the plaintiffs have approached the county several times seeking permits for commercial and business uses, including a hotel, cottages, a convenience store and a restaurant, and each request has been denied.

The statement issued by the county disputes that allegation. “Currituck County strongly maintains that it has not and does not discriminate against anyone, for any reason,” the statement said. “Furthermore, Currituck County maintains that no property rights have been violated by denying permits for commercial business development never allowed by county ordinances in the four-wheel-drive area.”