Ridealong with the plane spotting for large tankers aircraft that dropped water on the fire on April 24. (NCFS video) 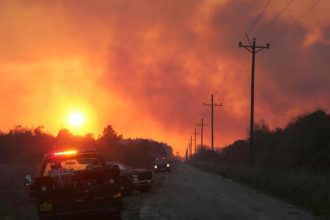 The fire was started accidentally by mowers on U.S. 264. (USFWS)

Activity on the Whipping Creek Fire has been steadily declining over the last few days, thanks in part to better weather conditions over the mainland of Dare and Hyde counties.

The fire that has been burning since April 18 on public and private lands around Long Shoal River between Stumpy Point and Englehard was 78% contained as of Thursday morning, and had charred 15,453 acres.

“With the forecast weather of 50% chance thunderstorms, relative humidity of 54% and wind from the southwest at 10 mph, the fire is not expected to increase in size,” said Bonnie Strawser, visitor services manager for Alligator River National Wildlife Refuge.

Infrared flights have shown few hotspots, which have been dealt with individually and directly by water drops and hand crews, according to Strawser.

Crews will use water drops, engines, and a marshmaster to douse those spots on Saturday, according to Strawser.

“Since the fire complexity and activity level have decreased, the need for resources, including both people and equipment, has also declined,” Strawser said.

The incident has been downgraded to Type 3, with local N.C. Forest Service and U.S. Fish and Wildlife Service personnel manning the fire zone. 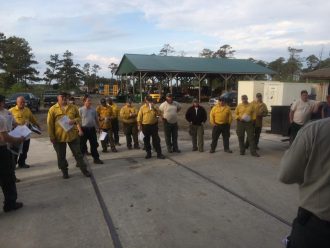 The number of firefighters on scene is being reduced. (USFWS)

“Firefighters will take no chances and will continue to monitor and mop-up until infrared flights indicate there is no heat at all,” Strawser said. “This group of firefighters will also maintain vigilance for any potential of new fire starts.”

Earlier this week, officials said they are not concerned that it will smolder in the nutrient-rich peat soil like others have in recent years.

One of the big concerns is that the fire could move into what is known as the “264 Low Pocosin,” an area encompassing 20,000 acres northwest of Stumpy Point in Alligator River National Wildlife Refuge with very few roads or canals.

The soil is made up of a rich, organic material known as “peat” that can be as much as 4 feet below the surface, and when ignited during extremely dry conditions, can burn and smolder for weeks on end.

“Rainfall during the past two years has fed the water table and the area is wet,” according to Strawser. “Compared to other peatland fires we’ve seen, this one is much less intense.”

Major wildfires over the last decade, such as the Evans Road Fire in 2008 and the Pains Bay Fire in 2011, produced smoke for months that blanketed the region at times. It took a major snowfall to eventually put out the Evans Road fire, and Hurricane Irene to extinguish Pains Bay.

Nearby Pocosin Lakes National Wildlife Refuge is working to restore as much of the the natural hydrology as possible in some of its pocosin habitat that was extensively altered by ditching and draining.

“These habitats will always have fire, but restoring a more natural water regime in portions of Pocosin Lakes Refuge will help us hold future fires to a shorter duration, meaning less ground fire, less smoke and less cost,” Strawser said.

Friday morning’s infrared flight showed no hotspots in the 264 Low Pocosin, which has been of particular concern to fire managers because it is inaccessible.

“The lack of roads and canals is a bonus in that the area is capable of holding water in a more natural way,” Strawser said. “The peat is wetter there than in areas that have been ditched and drained.”

The Whipping Creek Fire has cost about $1 million to battle as of Tuesday. In comparison, the Evans Road Fire burned for four months and cost taxpayers nearly $19 million.