Fire breaks out inside garbage truck in Southern Shores 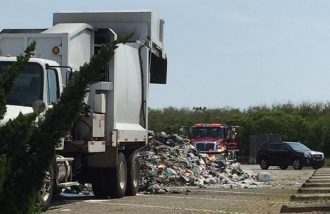 A fire broke out Monday morning inside a Dare County Solid Waste truck while it was collecting garbage in the Chicahauk neighborhood in Southern Shores.

Witnesses say the driver dumped the load in a parking lot to prevent the truck from being damaged, and firefighters quickly responded to put out the blaze.

Authorites had not responded to a request for further information on the incident. We will have more details when they become available.