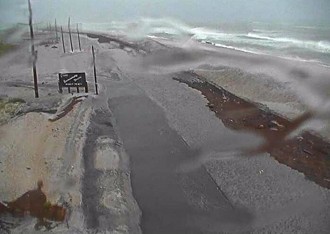 The new bridge will bypass the long-troublesome S-Turns area, which was last flooded in 2014 by Hurricane Arthur. (NCDOT)

As construction kicks into high gear on the new Bonner Bridge over Oregon Inlet and a concrete bridge over the Pea Island breach, plans for what to do with the once-chronic washout of N.C. 12 north of Rodanthe received more federal approval Tuesday.

The Federal Highway Administration has approved the revised Environmental Assessment for the Rodanthe Bridge, a key step toward building a new permanent span bypassing the S-Turns area at a cost of $179.3 to $198.3 million.

The settlement of a lawsuit brought in 2011 by environmental groups against the state of North Carolina that blocked the new Bonner Bridge had three main requirements before the legal action would be dropped, including a permanent solution at Mirlo Beach.

Known as Phase IIb of the overall Bonner Bridge replacement project, the 2.4-mile-long span will extend in a C-shape from the southern end of the Pea Island National Wildlife Refuge, over the Pamlico Sound and into the village of Rodanthe.

At least four structures in Rodanthe, including a collection of small businesses, are in the path of the new proposal. (NCDOT)

“NCDOT prefers this design over a bridge along the existing route of N.C. 12 because it minimizes impacts to the Pea Island National Wildlife Refuge, the ocean shoreline and the community of Rodanthe, while maintaining safe and reliable access for area residents and visitors to southern Hatteras Island,” said NCDOT spokesperson Nicole Meister in a news release.

Following public meetings in January 2014, NCDOT changed its preferred option for a long-term solution in the Rodanthe area from a bridge within the existing N.C. 12 right-of-way that would bisect the Mirlo Beach neighborhood. Instead, it plans to build the “jug handle” shaped bridge.

“This alternative has been redesigned since the 2014 public meetings in order to minimize impacts within Pamlico Sound and to the Rodanthe community,” Meister said.

The next steps include NCDOT soliciting public comments on the revised Environmental Assessment and a set of local public meetings this summer to publicize the preferred alternative.

The highway department will partner with the federal agency to consider those public comments and identify the final selected alternative as required under the National Environmental Policy Act.

A Record of Decision can then be issued concerning the route choice, which allows the NCDOT to award the project as early as this fall.

“The project will be built using the design-build method, which allows the department to contract a team that consists of both designers and a contractor to simultaneously design and construct the project,” Meister said. “Projects can be let sooner and completed faster using this approach.”