Future interstate from Chesapeake to Raleigh will be I-87 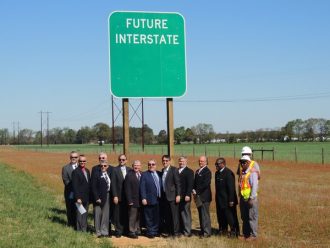 A future intestate sign was erected in March on U.S. 70 outside LaGrange.(NCDOT)

The number has been approved for the interstate that will one day run along the U.S. 17/U.S. 64 corridor through northeastern North Carolina, but it will likely be more than a decade before the road is officially part of the Interstate Highway System.

The American Association of State and Transportation Officials has approved North Carolina’s request for I-87 for U.S. 64/17 between Raleigh and the Virginia state line, and I-42 for the U.S. 70 Corridor between I-40 in Wake County and Morehead City.

Governor Pat McCrory touted the connections as part of his ’25-Year Vision for North Carolina’ infrastructure improvement plan in a statement issued Wednesday.

“They bring a much-needed interstate corridor to the Hampton Roads area, stronger connections between our important military bases, and enhance economic development through faster shipment of freight for our ports and Global TransPark,” McCrory said.

I-87 will eventually begin at the I-64/I-464 interchange in Chesapeake following U.S. 17 into North Carolina.

While some of the highway has been brought close to interstate standards outside Elizabeth City and Edenton, long stretches from the state line to the Chowan River will have to be upgraded or even bypasses constructed.

No timelines for upgrades or construction have been established along the route in the Strategic Transportation Improvement Plan, which covers road building plans in the state through 2027.

Some funding for the interstate additions will come from a $305 billion federal transportation funding act approved by Congress late last year.

The interstate will continue along or near the current U.S. 17 to Martin County, where it will then transition onto the present-day U.S. 64 outside Williamston and follow the same route to the I-95 interchange.

From there it will be co-signed with I-495, which was recently added to U.S. 64 from I-540 to I-440 in Wake County, and will eventually be the shared route number between Raleigh and the East Coast’s main north-south interstate.

I-87 will become the sixth repeated number in the Dwight D. Eisenhower National System of Interstate and Defense Highways.

Its duplicate is the main highway connection between New York City and Montreal, running from The Bronx to the Canadian border.

With the official designation, the N.C. Department of Transportation can now proceed with determining where “Future I-87” and “Future I-42” signs should be installed and pursue approval to install those signs from the Federal Highway Administration.