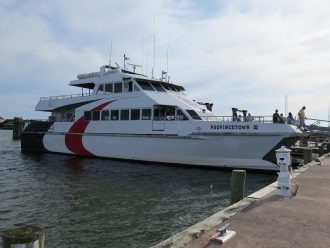 The Provincetown III, which operates between Boston and Cape Cod in the summer and the Virgin Islands in the winter, was used for test runs in May 2015 between Hatteras and Ocracoke. (Peter Vankevich/OcracokeObserver.com)

Results have yet to be released of a study of the N.C. Department of Transportation instituting passenger ferry service between Hatteras and Ocracoke villages, six months after it was supposed to be completed.

Passenger-only service has been discussed as a potential option to alleviate delays for travelers getting across Hatteras Inlet due to shoaling that has forced vessels to take twice as long to cross.

Long delays at the docks have slashed the number of day trips to the island by visitors staying on Hatteras Island and the northern beaches, hurting businesses on Ocracoke.

The Ferry Division has to pay more in fuel and labor costs because of the longer trips and additional vessels running the route to meet demand.

At the monthly meeting of NCDOT Ferry Division officials with Ocracoke residents on Monday, Deputy Director Jed Dixon said it has yet to be seen by the department’s oversight panel.

“We haven’t been able to get it in front of the Transportation Board,” Dixon said, according to the Ocracoke Observer. “It keeps getting pushed back. I can’t bring it to you until they approve it.”

Officials said last year the feasibility study, which began in April 2015, was to be completed by December.

“It should be considered at their July (Board of Transportation) meeting,” said Angela M. Welsh, director of the Albemarle Rural Planning Organization on Friday.

The organization is part of the Albemarle Commission, a consortium of the local governments in 10 northeastern N.C. counties, and provides recommendations to the NCDOT on funding of the area’s transportation projects.

According to the N.C. Board of Transportation’s schedule published in August 2015, the next meeting is slated to take place June 29 and 30.

The agenda for that meeting had not been posted on the board’s webpage as of Friday morning.

The passenger ferry feasibility study included test runs of the possible ferry route, passenger surveys and meetings with the public and stakeholders, according to the NCDOT website detailing the survey.

It has also identified the kind of infrastructure and parking improvements, and transit options on Ocracoke, that would be needed before service begins.

Dixon said the study’s director, Will Letchworth, is scheduled to attend the Ferry Division’s public meeting in Ocracoke on July 11, and they hope to be able present the study results at that time.